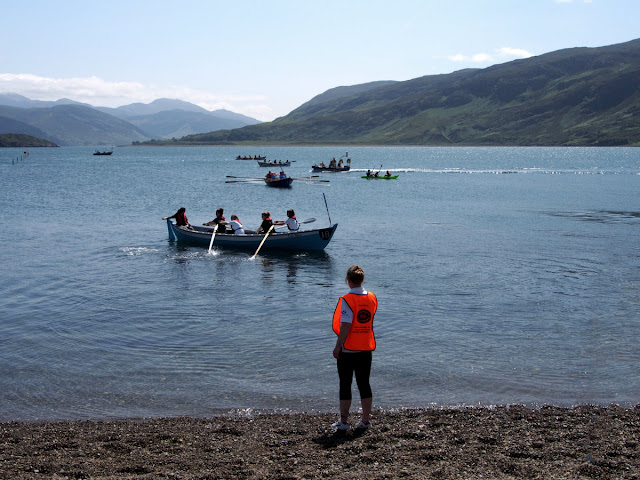 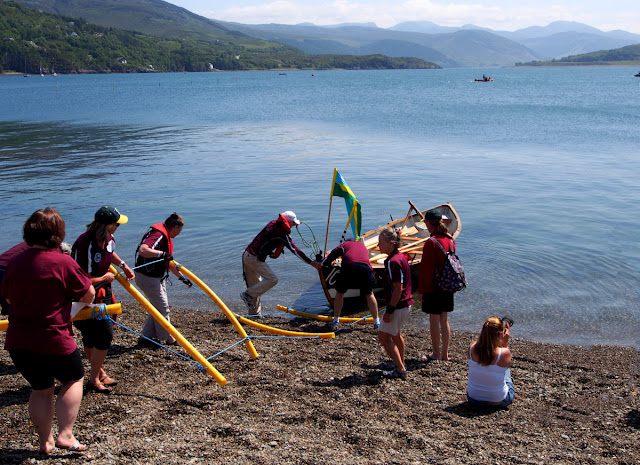 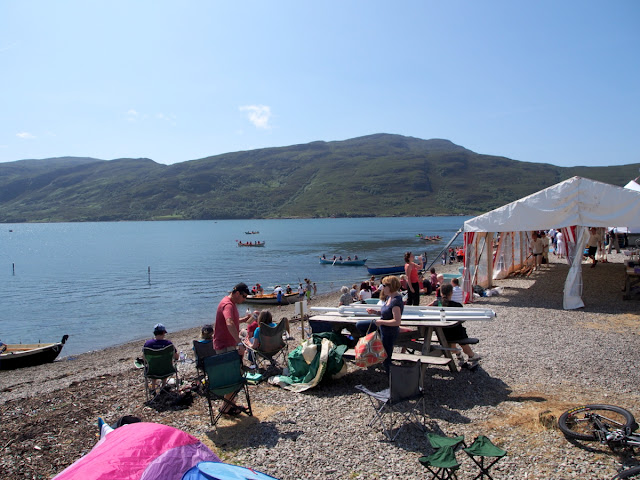 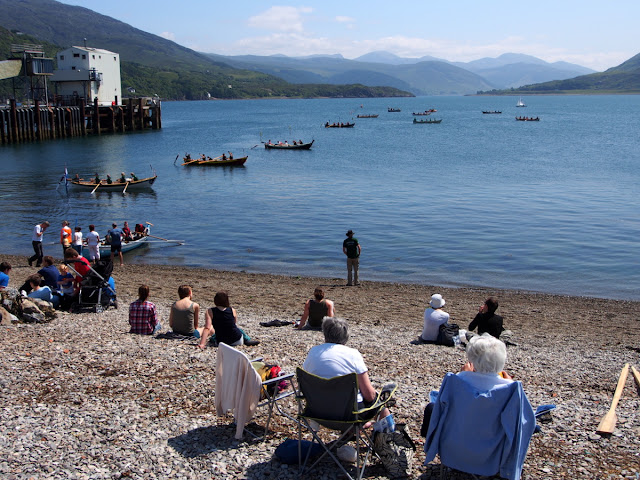 Lochbroom has been busy. During the second week of July  Ullapool hosted 'The 2013 St. Ayles Skiff World Championships' It was wonderful and you can read about it here. There have been cruise ships coming and going including 'The World' which arrived like an enormous block of flats and stayed a day or two. 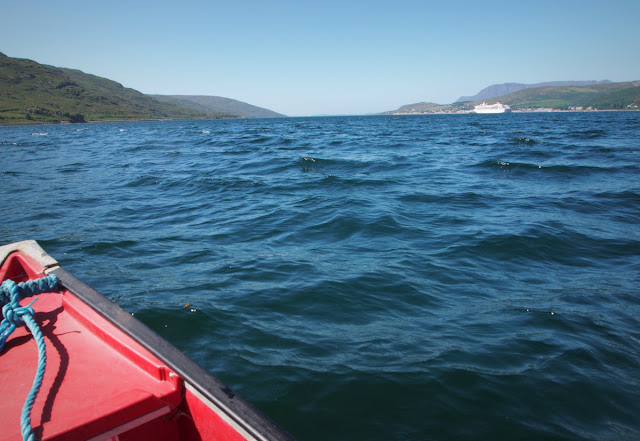 At the weekend the Balmoral sailed in. Not wanting to be left out we did our own mini cruise in the ancient yet trustworthy, slightly battered (and now, full of cobwebs)  canoe that lives at the bottom of the garden.
Our cruise was to take in the sights along the shore on the far side of the loch opposite Ullapool 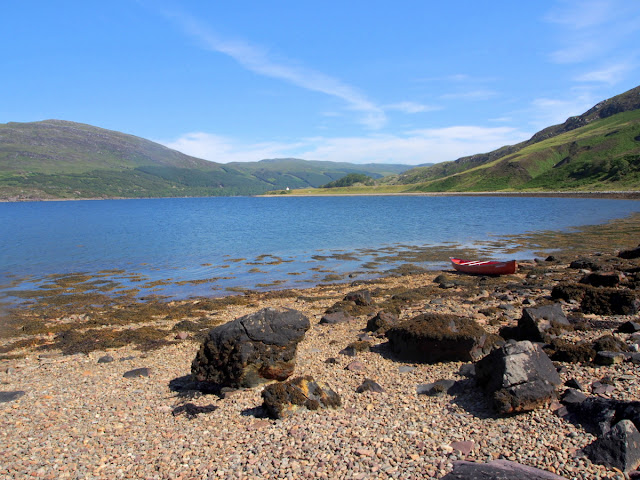 Now, I know this doesn't look like paradise, but to me it felt like it. Even without the golden sands and palm trees, the pebbles were warm to sit on. We travelled third class on our cruise and there was no provision for sun loungers or cushions. 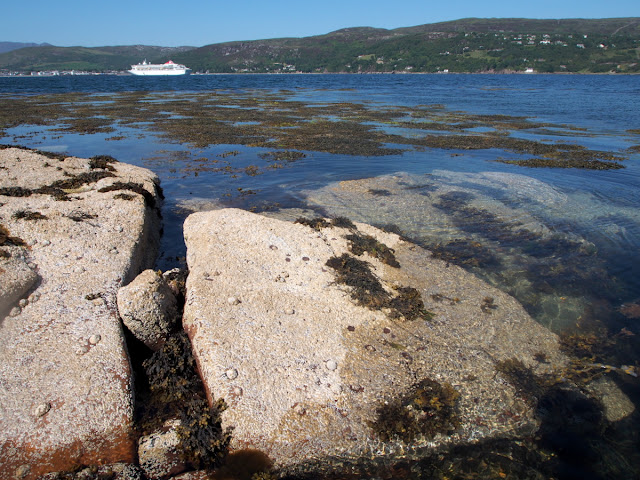 Ullapool (and the Balmoral) lay just across the water, yet it felt  isolated where we were. There is no road access to the beach of pebbles, the only way in is either a long walk  over very rough and steep terrain or by sea. We sat, eating  bananas, and drinking water and I would have stayed all afternoon but one of the people on our cruise (there were only two of us) was anxious to be off! 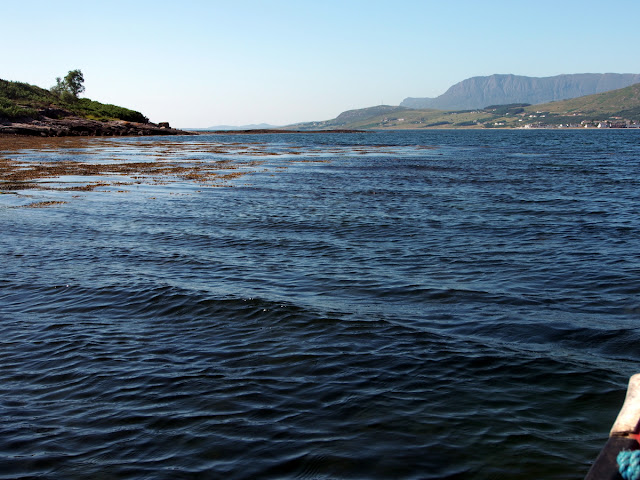 Within minutes of setting sail getting the paddles out, I started squeaking and trying to focus the camera. The captain asked me to be quiet, sit still and stop rocking the boat. I couldn't believe it. There, just up ahead, looping the loop, in and out of the seaweed, was an otter! I've lived here for six years and though I'm told by neighbours that otters are plentiful, this was the first one I'd seen - ever, except on television....and that doesn't count. 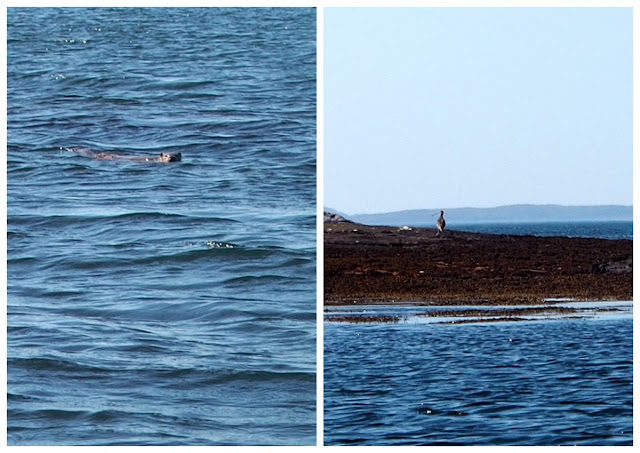 And then, almost at the same time, I saw a curlew. He was huge and had the most enormous awkward looking bill. If you squint, and peer at the blob (the curlew) on the right , you can see it, just. It isn't a good photo. I've cropped it a zillion percent.  I don't have the lens and the canoe wouldn't stay still! 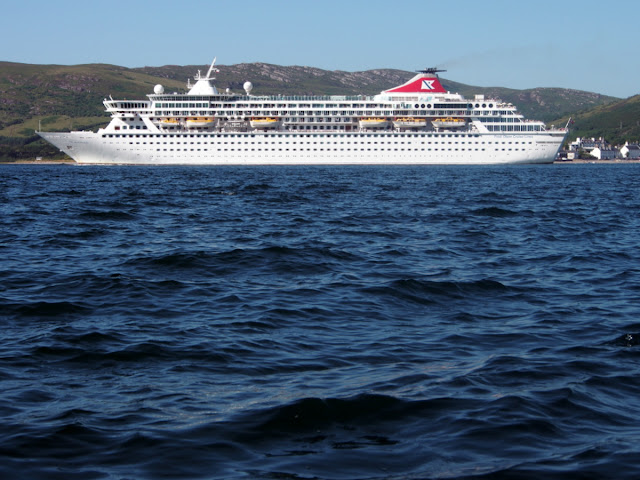 Meanwhile, the Balmoral had up-anchored 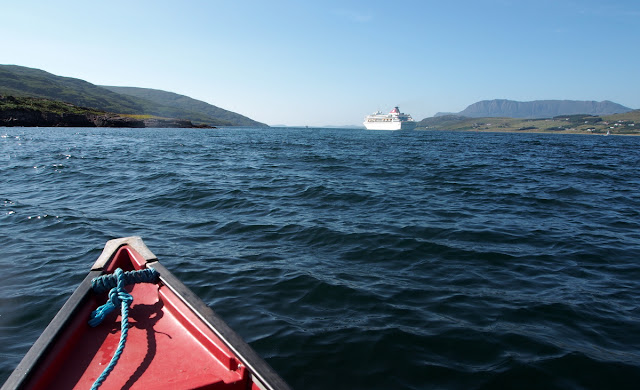 'Hey' I shouted  'Look over the side, and see the wildlife' But the Balmoral had her own wildlife on board and sailed out of Ullapool with one long blast from her horn and the cabaret in full and deafening swing. 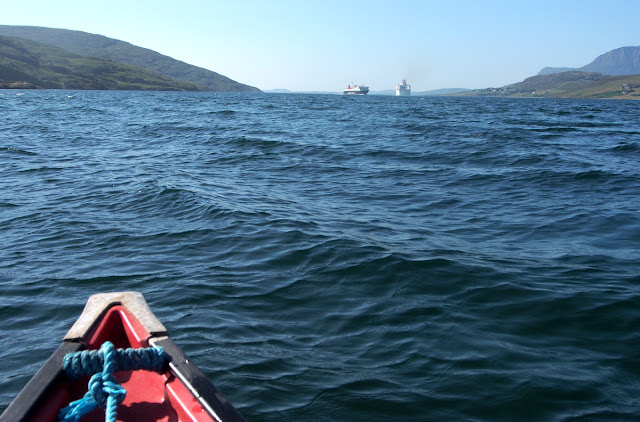 As the Balmoral left Ullapool, the ferry from the outer hebrides sailed in. 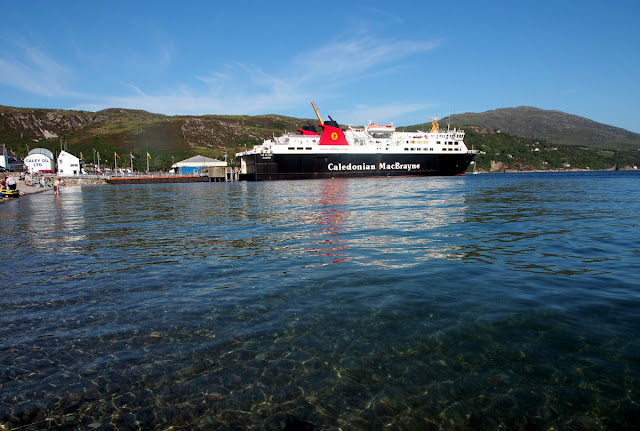 It ferries passengers and vehicles to and  from Stornaway and  Ullapool 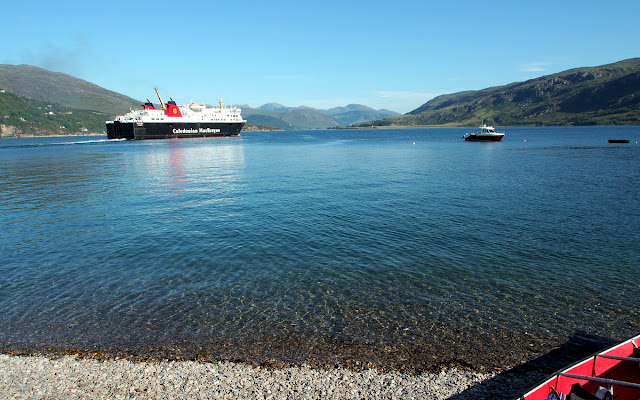 By this time, we had also reached Ullapool. It was 'Happy Hour' on the canoe, and as bar space is limited on board, the captain (obeying orders) with the help of the passenger pulled the canoe up on shore and enjoyed a packet of peanuts and a glass of chilled white wine while waiting for the Caledonian  MacBrayne ferry to leave the shipping lane so as to avoid getting tangled up on the journey home. 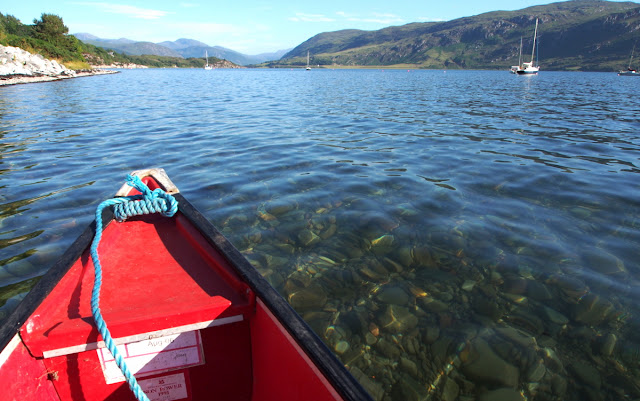 It was very warm and a glass of wine is probably not the best refreshment when paddling in a canoe! 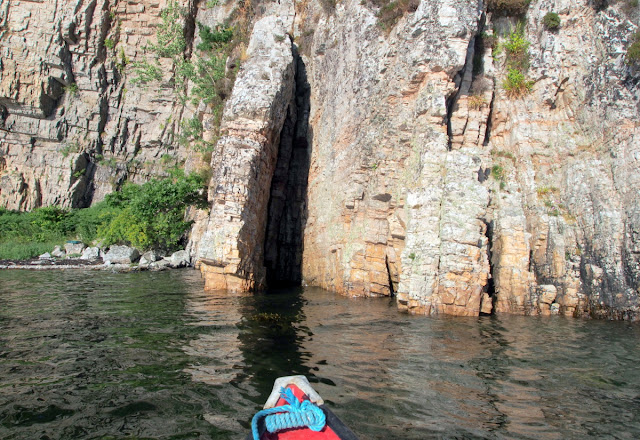 We've never taken the canoe over to the other side of the loch on the homeward stretch. It was very beautiful. 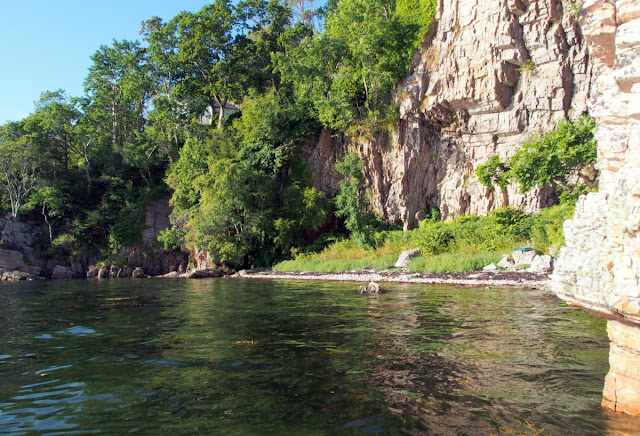 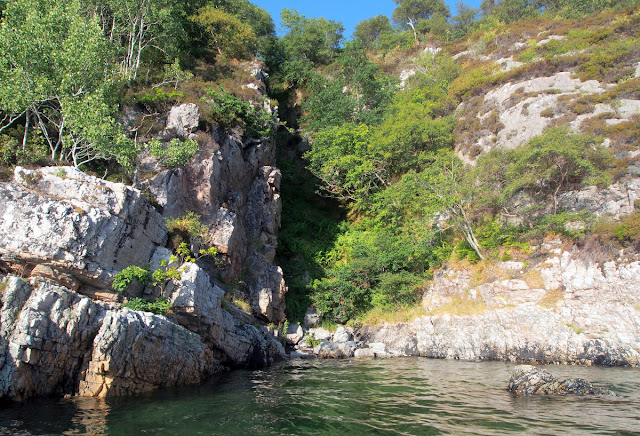 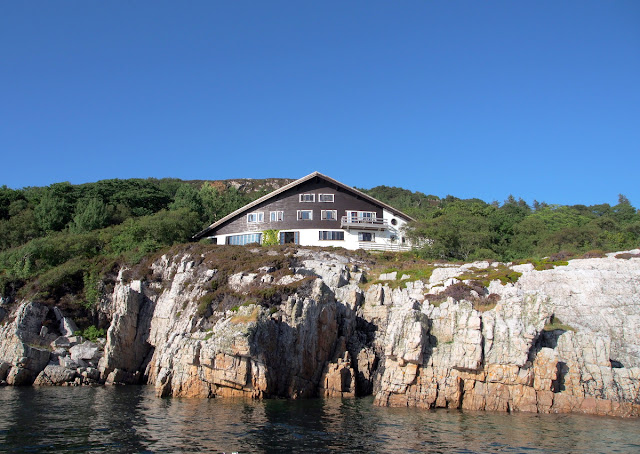 This is for sale. Overs over £695,000. It has five bathrooms which seems rather a lot. It's challenging enough cleaning two. 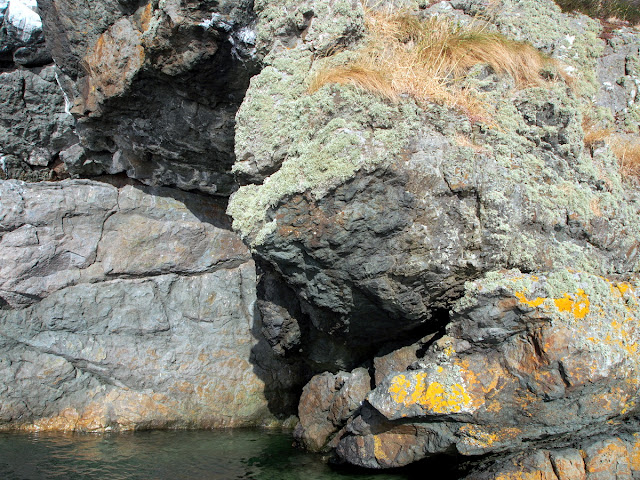 And this home here. We could see that birds nested but couldn't see what they were, until two startled rock doves hurtled out of the cave at full speed 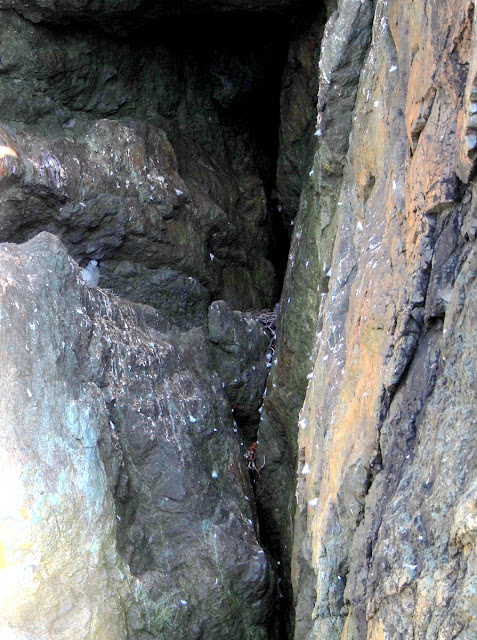 You can see, halfway up on the left, a remaining rock dove, probably frozen with fear, at the sight of a red canoe sticking its nose in through his front door. 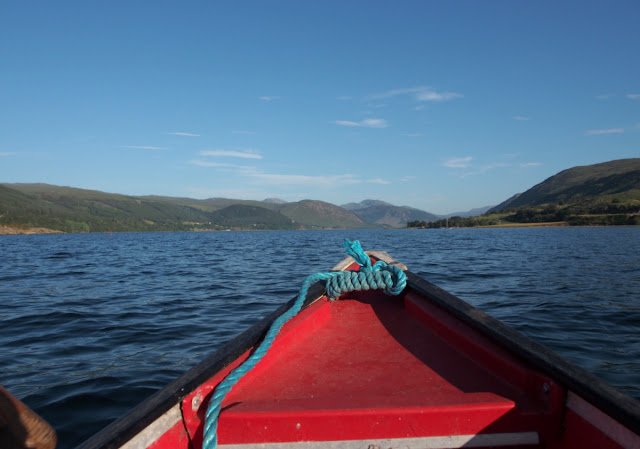 And so we paddled home. We were weary but it was a wonderful afternoon. I love our  canoe. We bought it in 1991 and drove it on the car roof rack when we moved up here. I shall remember to dust it next time I put it on my blog!

How beautiful and clear the water is, as to the folks on the boat, I've decided that most people cruise in order to see how drunk they can get, not to see anything.

To see an wild otter is so very special. Lucky you. What a wonderful place you live in, Hoffs.

I would rather have your cruise! A friend was tryinng to cnvince me that I would like a cruie - but the more examplles she gave, the more I decided I didn't want to go on one! Fabulous photos, and wonderful shades of blue!

What absolutely gorgeous photos, as always. It certainly DOES look like paradise! I'm so glad you saw an otter. We saw one once, walking in the evening on the Isle of Jura. It was busy fishing in a wee burn, and soon slipped off. It was much larger than I'd expected.

Thanks so much for sharing all this with us! Very relaxing indeed.

I would have your cruise any day over that of the people on the floating wedding cake!
We had hoped to make it over to the west coast this summer but will have to defer to the autumn - your photos have increased my resolve to make it happen.

I missed this trip. I also missed the Skiff racing. The brain is disintegrating.

You saw an otter! How wonderful!! And The World - we amused ourselves once by looking at its website and imagining ourselves in one of those 'apartments' - rather a weird concept though!

I'd take your cruise any day. I have a horror of floating hotels. Too many people. They'd have been too high up to see the otter or the curlew.