A lick of paint 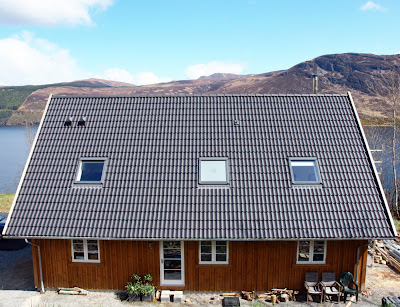 We've been having a house painting party which explains the silence on this blog for the past two weeks! 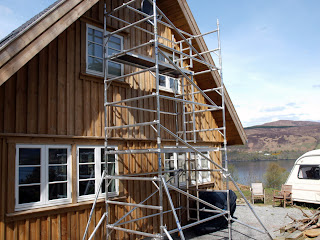 The scaffolding tower is erected 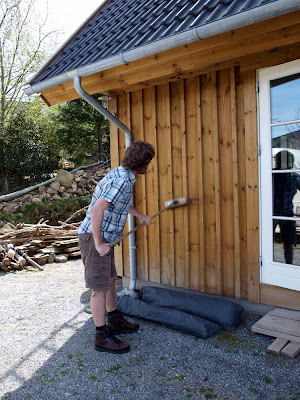 Robin gives the house the brush off! 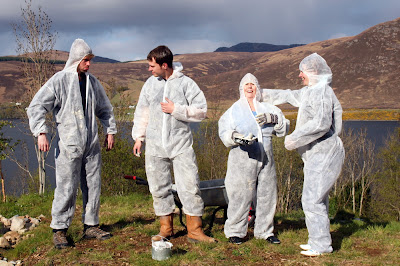 some of the painting team try on their painting outfits! 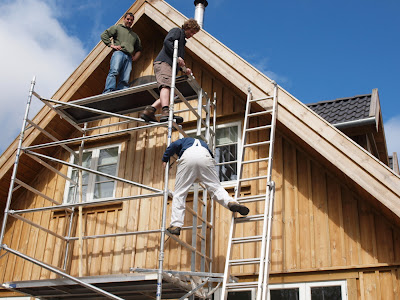 while others play on the scaffolding! 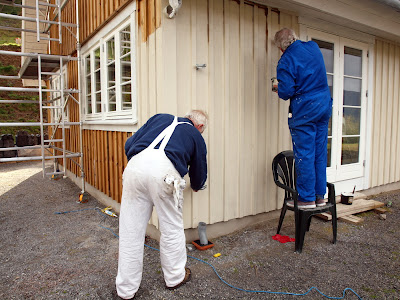 Once the primer had been re-applied, (re-applied, because we left it too long the first time round before painting) the serious work of painting the house gets underway.
We were twelve people sharing two houses. We rented Tigh na Alt  along the lane, highly recommended as a holiday cottage (we stayed there for six months when we first came to Letters) 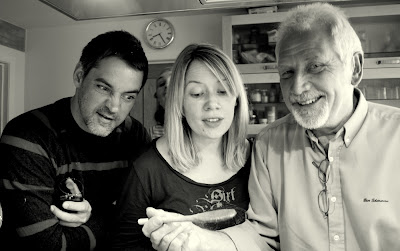 Em and Dan, baby Olek and Em's Dad Peter stayed there and Jo and sometimes Ollie and Robin.
and Peter cooked a wonderfully tasty curry for us one evening. Em would want me to say that Dan doesn't normally look like this - he's really very handsome, just overwhelmed with the curry - as we all were. 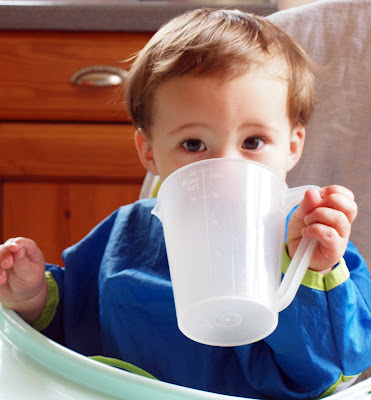 With so many painters we needed a foreman. Olek fitted the bill. He liked the occasional pint and had a very fine way of showing disapproval if the painting failed to meet his exacting standards 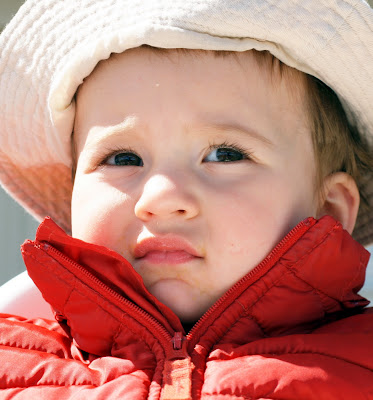 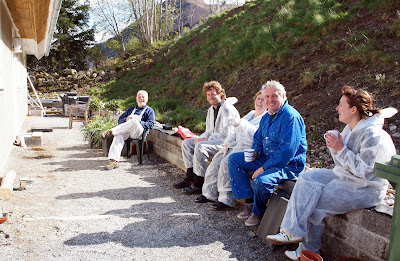 But he allowed tea breaks. Pauline and Michael sitting with our kids and Peter came all the way from warm sunny Surrey to help with the painting 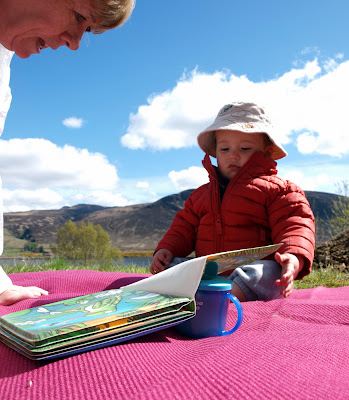 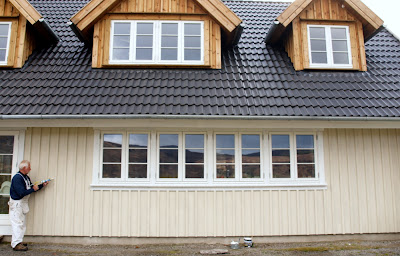 and bit by bit the house transforms, and while local opinion had been very much against painting the house white I think this will look good, antique white with white door and window surrounds 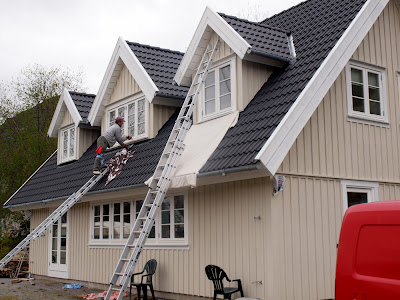 Myles as always was marvellous and just kept on painting. 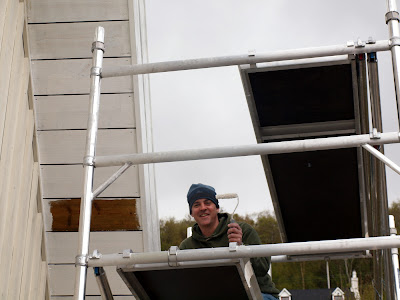 Dan paints the very last bit of bare wood with this tiny roller! 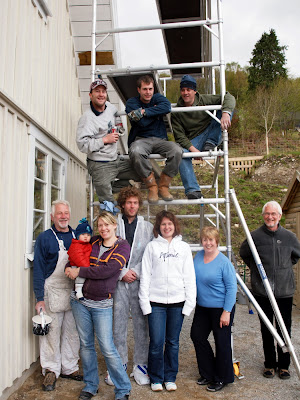 And we celebrate, although one of the team, Pauline's husband Michael, is having a lie down - exhaustion I expect. Anyway the foreman looks happy - I think! And I would just like to say a huge 'Thank You' to everyone who gave up a week to come and help paint our house 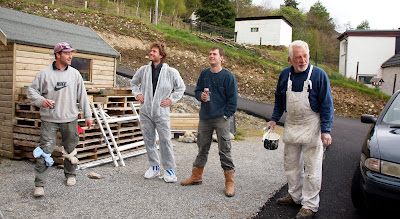 four lads admire their work, though I'm not sure what the fourth lad is admiring! 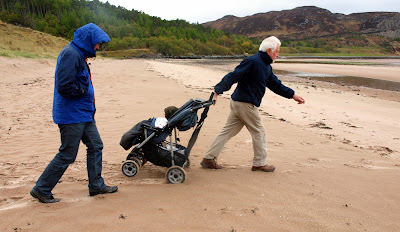 As a treat, and because it coincided with my birthday we took the foreman to the beach last Saturday once all the painting was finished. 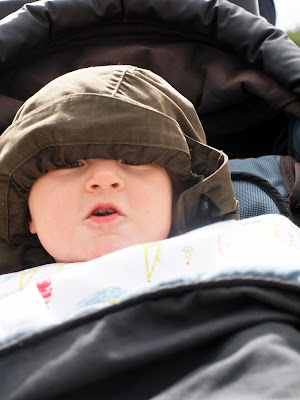 I think he enjoyed it,  but it was cold wet and windy - the warm spell in the south hadn't quite arrived here at that point, but at least he didn't have to inspect walls and door surrounds, cutting in, and glossing up! 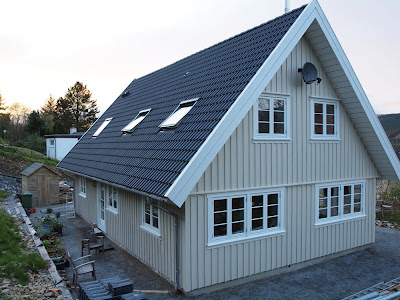 And the house looks lovely 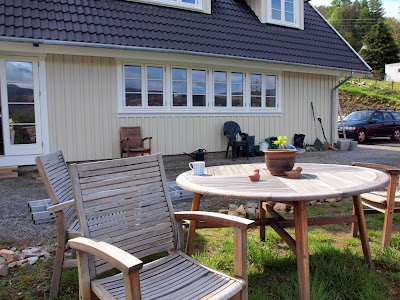 It looks absolutely gorgeous! Antique white is such a good colour for all seasons, weather and light. The Foreman is rather lovely too. Shame about the weather though!

great accomplishment and the light must be fantastic with all of those windows ... that foreman is a charmer as well!

Although your friends and neighbours weren't pleased at the thought of painting over your lovely wood have to admit your house does look really nice. I think because it is a gently white. Wonderful painiting team and foreman.

Thank you Alison. It does mean a lot that friends and neighbours approve. We like it too!

it looks wonderful and should age well, everything we leaved unpainted ages, but often not well.

Oh....building a garage, making a garden, planting trees, felling trees, planting a hedge, finishing the groundwork outside the house, building a ramp to front door (building regulations) finishing the stairs, the flooring, some tiling, more painting - the list goes on!

But for now next on the list will probably be some work in the garden.