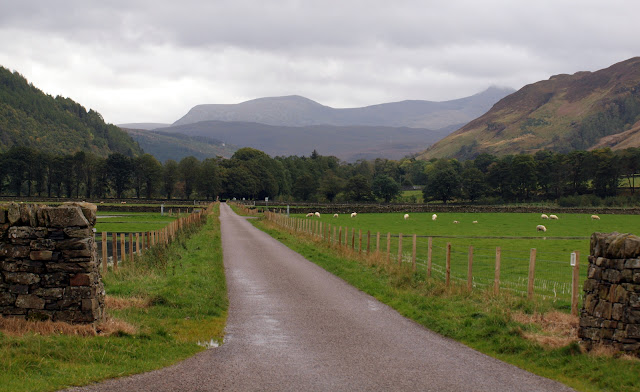 The start of our lane runs  through the middle of several large fields. Used mainly for sheep and occasionally cattle. At this time of year geese move in and graze, and as and from yesterday.... 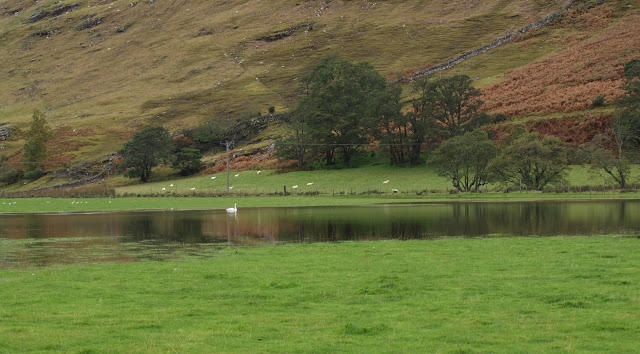 A Whooper Swan dropped in. I wasn't sure at first 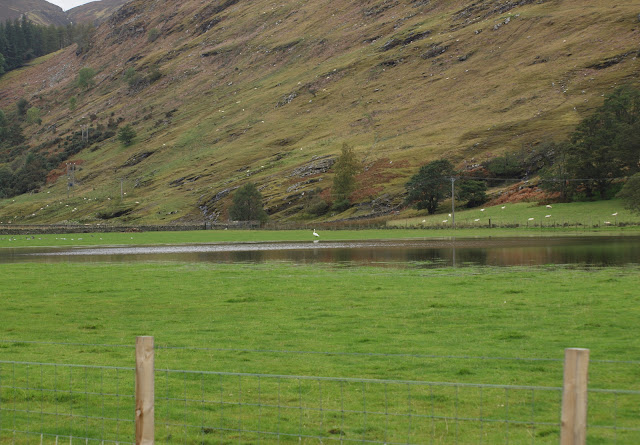 He was a long way off. He could have been a thin sheep with long legs 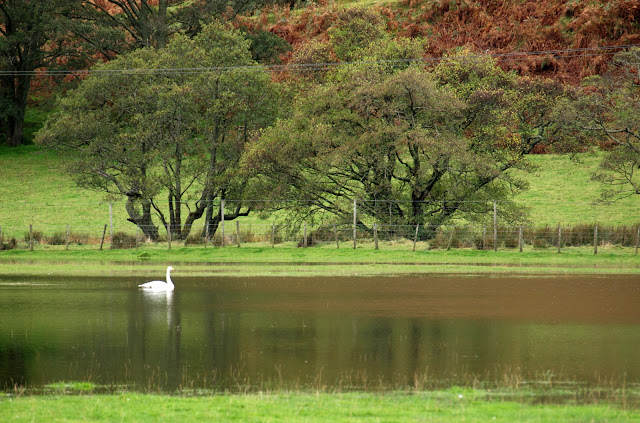 but then he became very swan like and glided up and down  on an extra large puddle in the far field. When I got home I 'googled' Whooper Swans;  they like wet grasslands which is perfect, as the grass here is wet in the extreme.  He may have flown in from Iceland. It must be warm, sunny and dry here by comparison? His  puddle is unlikely to dry up within the next few days.... 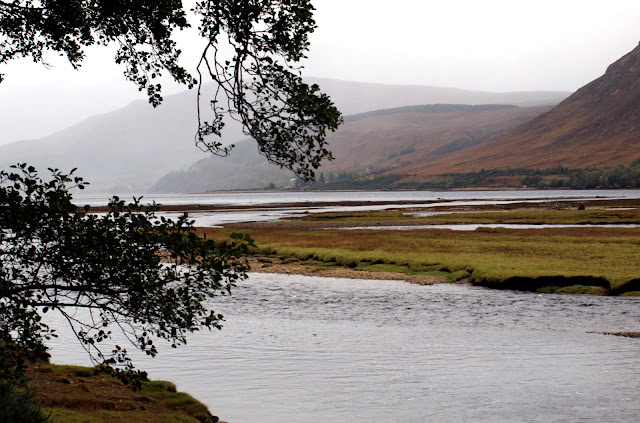 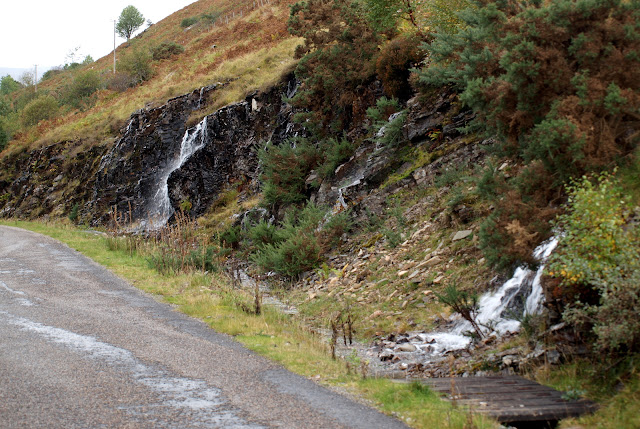 and pours off the hillsides by the bucketful 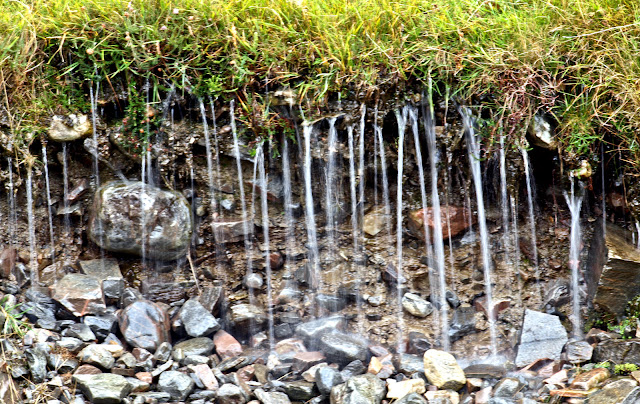 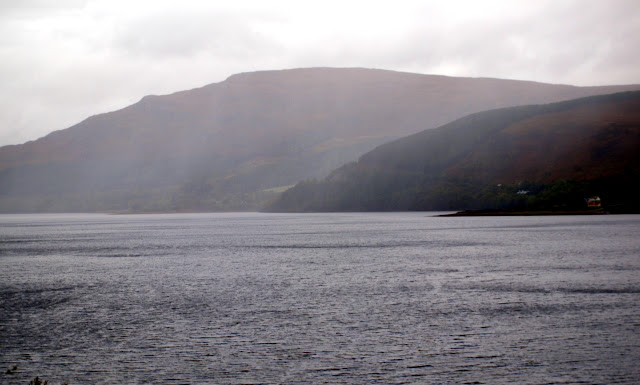 It does have a certain beauty, and I'm trying to look on the positive side. The house doesn't leak 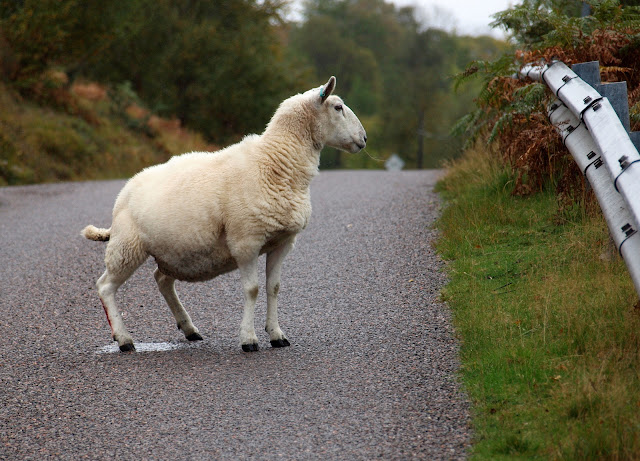 which is more than can be said for some of us....! 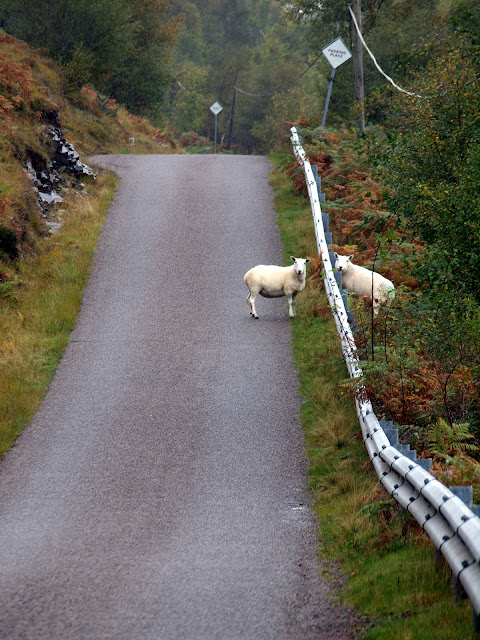 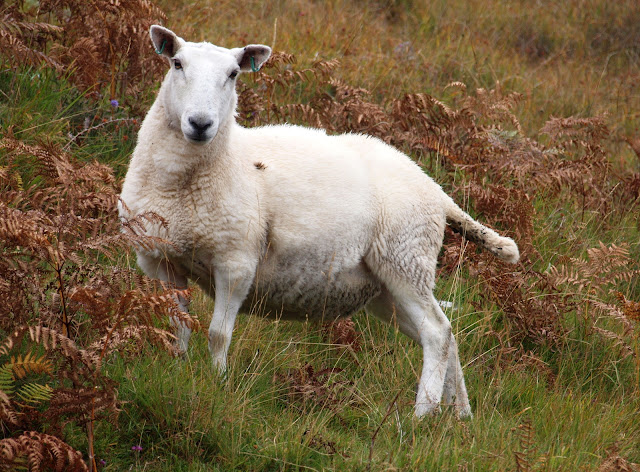 It doesn't matter how many cars and people the sheep see, they always fly into panic mode and behave as if they've never quite seen anything like it before!
Posted by annie hoff at 19:58

Hi Annie
Are they called Whooper swans because of their call, or something else?
I love the picture of the sheep in the bracken, and also the water falling through the rocks - really lovely!
Dan
-x-

The sheep obviously think you are quite mad!

I like those two "friends" chatting across the fence. Your photos are always so beautiful.

Wow, what fantastic photos as usual! I love the one of the rain pouring off the hillside by the bucketful. The swan is a wonderful too. Are those two sheep on the way to inspect your newly located shed or to help build the garage? Keep dry! Di xx

A beautiful post. The Whooper is a find. Funny there is only the one. I've always seen them in family groups.

Always stunning and interesting! It's such a pleasure to read (and view!) your blog, Annie. It's my favorite place to visit.

Hi Dan, Whooper swans are noisy and gregarious frequently giving a bugling 'whoop-whoop' call - according to my bird book that is, so maybe that's where the name comes from?

Yes Linda, I'm sure the sheep think all humans are mad! They have a look in their eye that says 'mad woman alert' every time I come by!

Hi Diane - there will be trouble if those sheep come any where near my garden shed..!

Adrian, maybe this swan was tired or off course somehow? There were a pair last year on a loch not far from here. It's the first time I've seen one in the field in the lane.

It's still raining here, it doesn't run off it just gets boggier.
Love your whooper swan, had never heard of them.

Oh what stunning scenery. That picture of the water dripping onto the stones is absolutely fbulous. x

I just love that photo of the lots of little streams of water coming from the ground. It certainly looks wet - great to see the pictures, but I'm not sure I'd want to experience it.