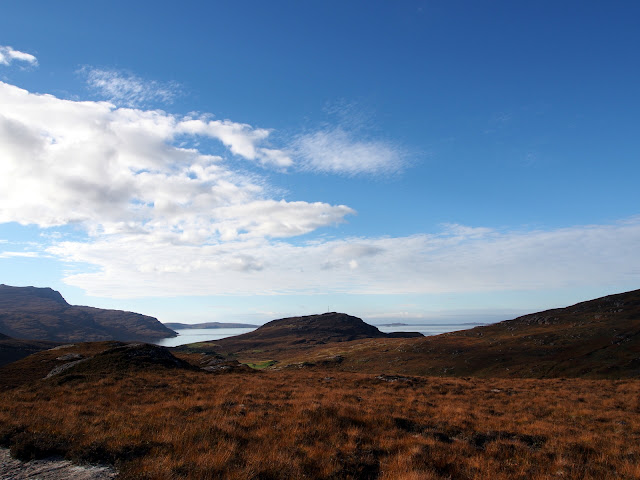 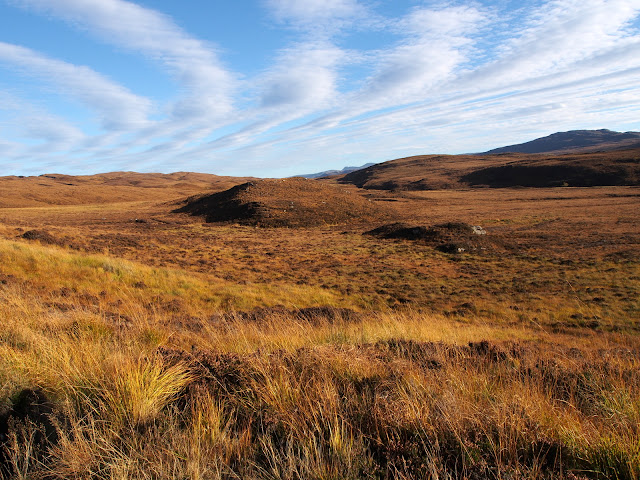 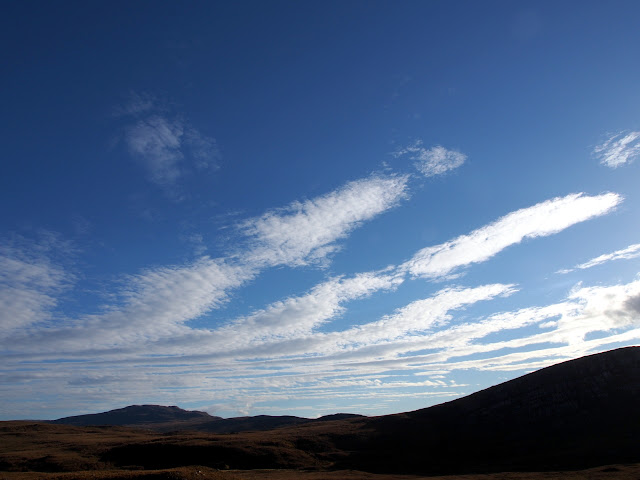 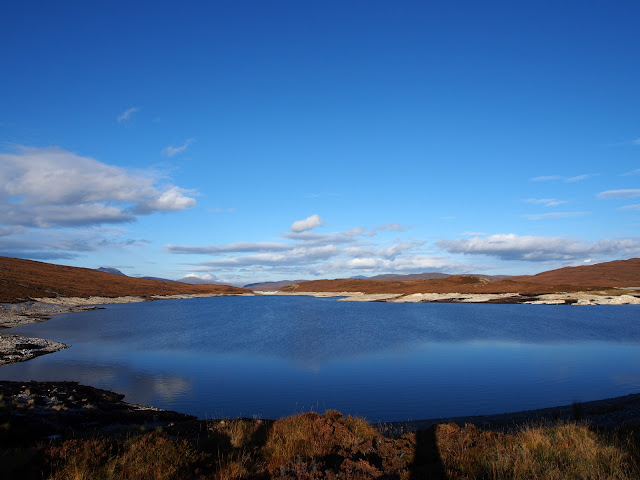 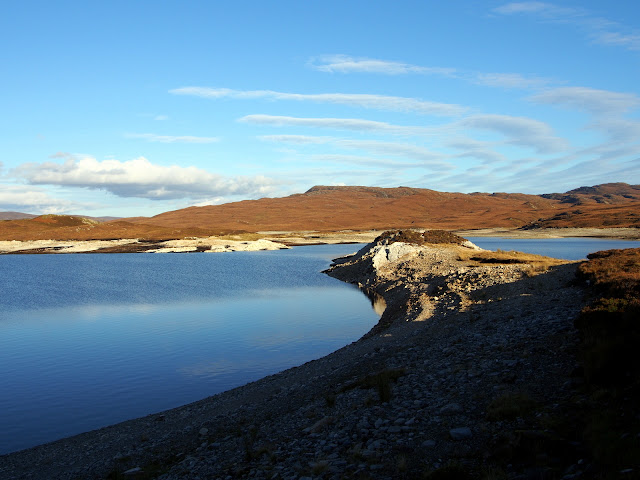 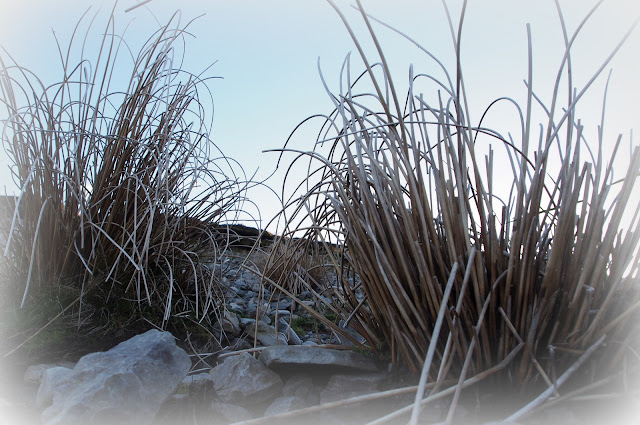 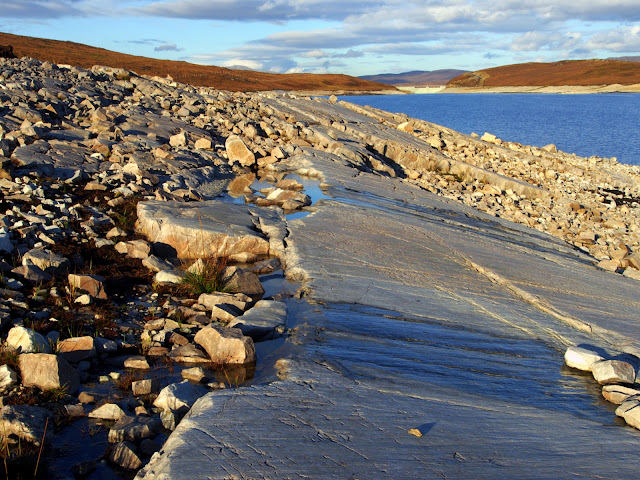 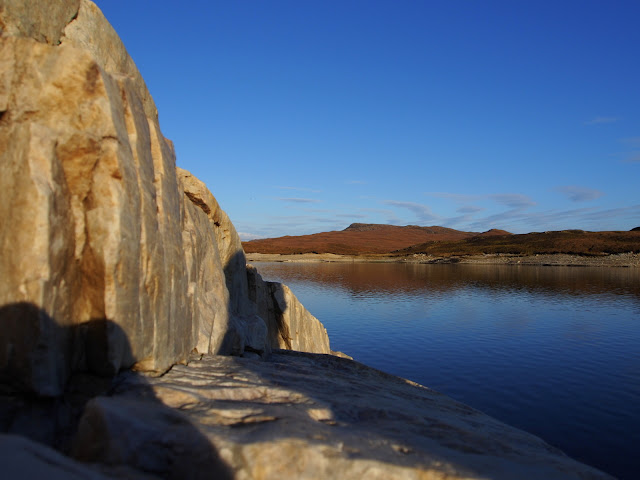 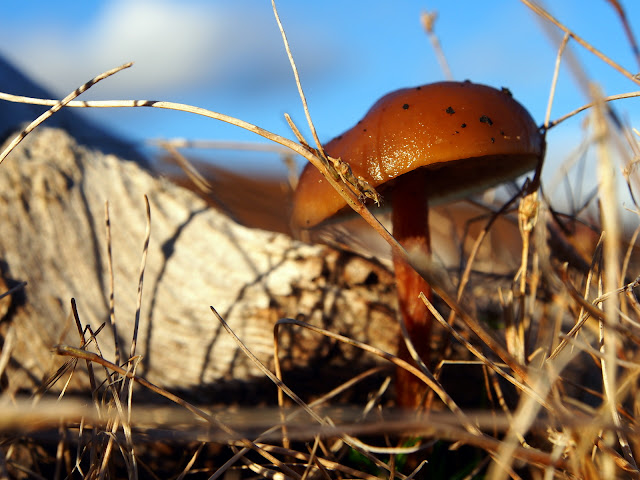 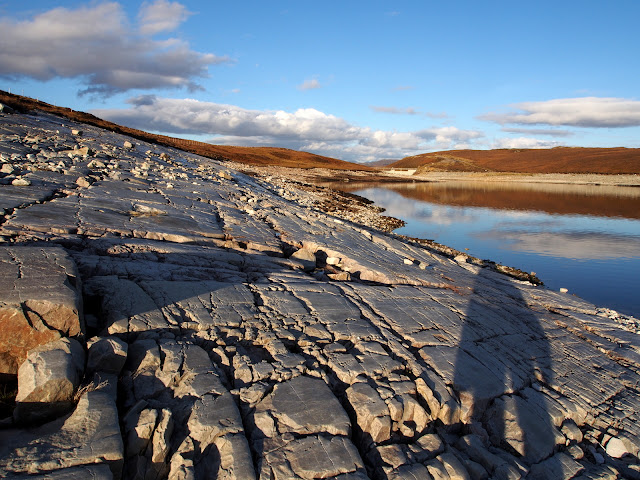 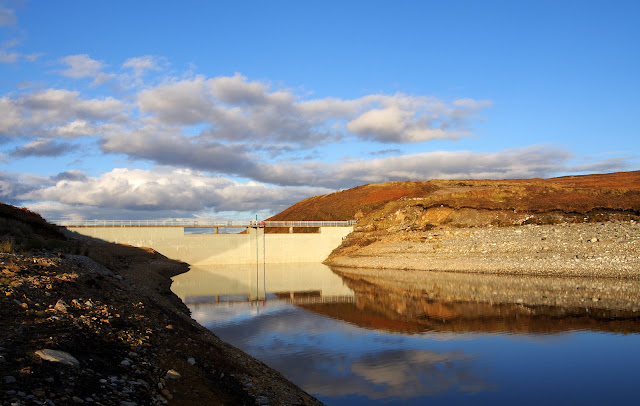 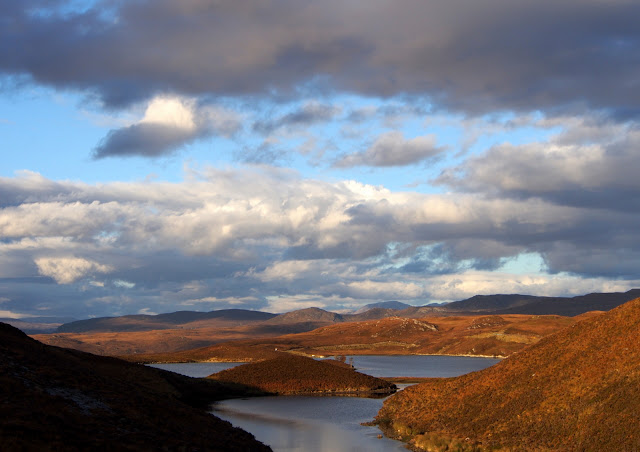 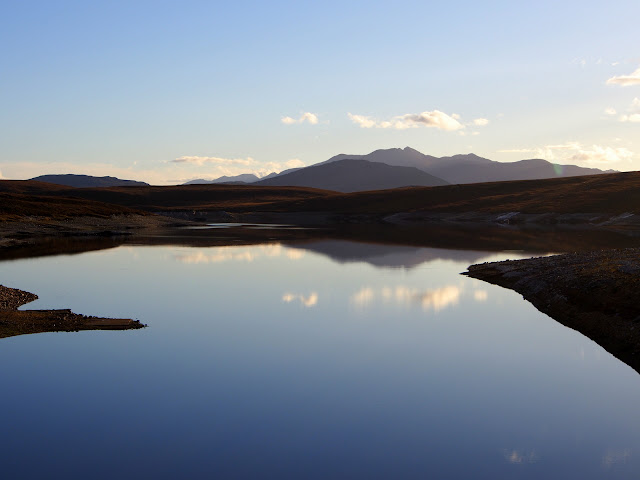 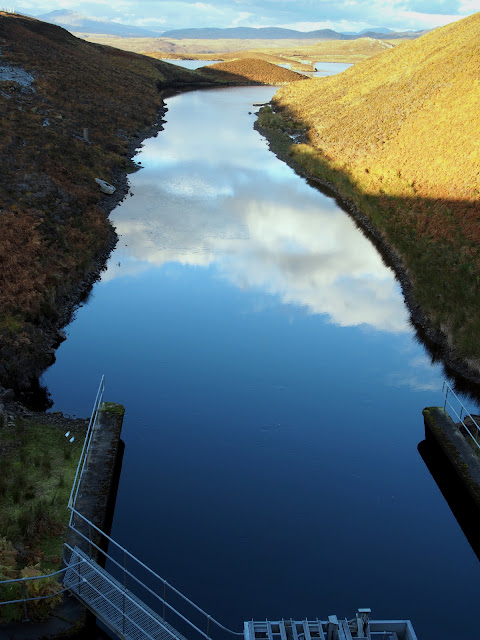 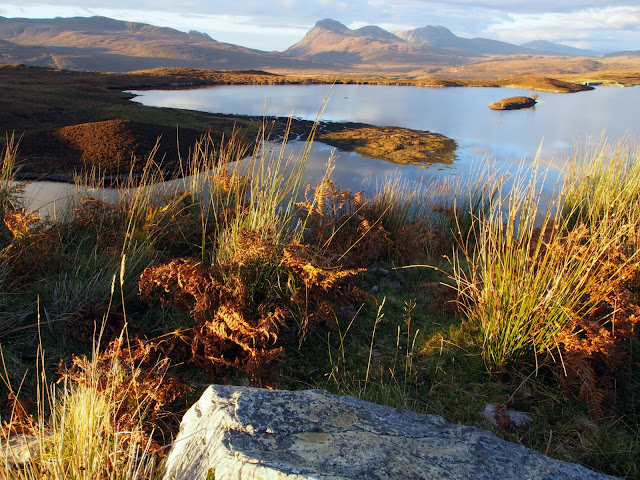 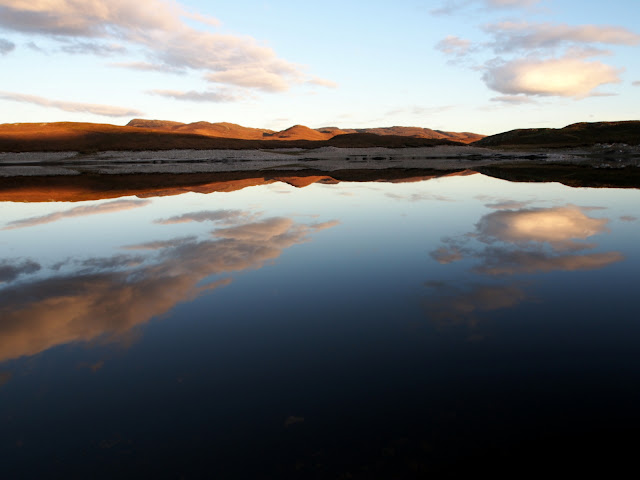 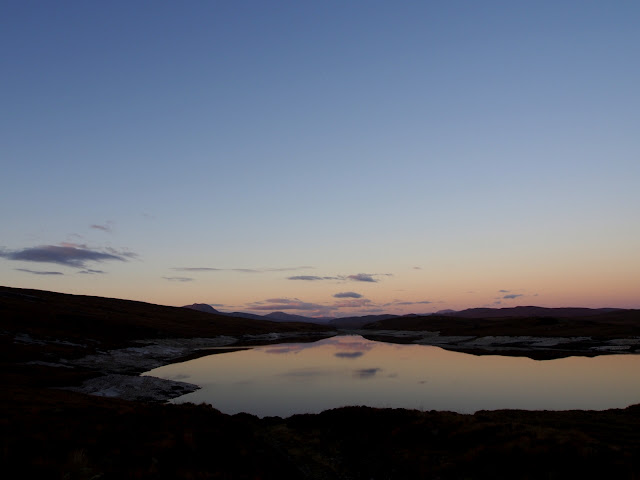 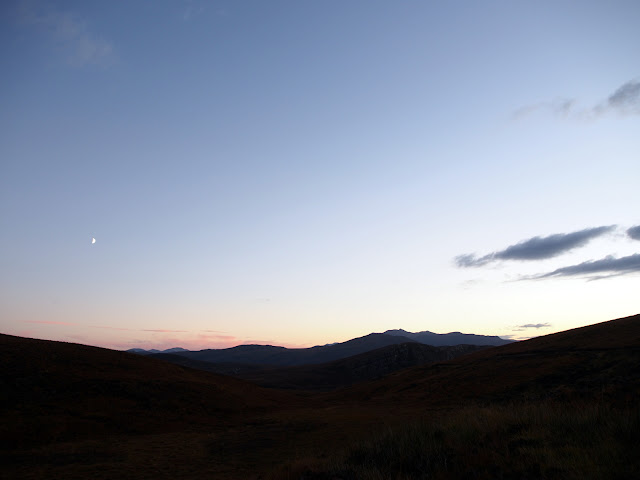 A big full on beautiful day. The wonderful contrasts of Autumn sun in the Scottish Highlands. We walked to Loch Dubh Dam, situated up in the hills to the north of Ullapool. The loch sits on a plateau and commands wonderful views over the surrounding area. The dam is just visible at the far end of the loch and from there further down the hill two more dams have been built in order to generate renewable energy. I can't describe the silence and the feeling of being transported to another place. Apart from the occasional 'plop' as a fish showed its head out of the water, or a bird, taking off, startled by our presence there was total and absolute quiet. It's so rare that when you hear it, it really is deafening!
The plan was to walk to the first dam returning back to the track on the same side. We stuck together in our usual style ie. Niels being way ahead, me, being way behind trying to straighten the camera on a rock or just standing, with my mouth open!  I became aware while admiring the stunning views from the dam, that I hadn't seen Niels for a while and that the sun was going down. I walked on until there was a fork in the track and I was in doubt which way to go. I took the sensible option and retraced my steps back along the side of the loch to where I knew if needed I could make my way back down to the car by the light of the moon! Finally after an age I saw in the distance in the rapidly failing light a tiny moving figure coming towards me. The wanderer apologised saying he was sure I was following behind, before realising he'd mislaid not only his lovely wife but his walking pole too. 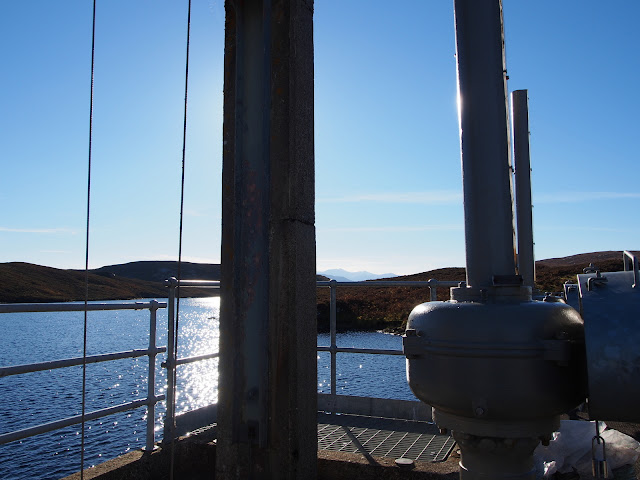 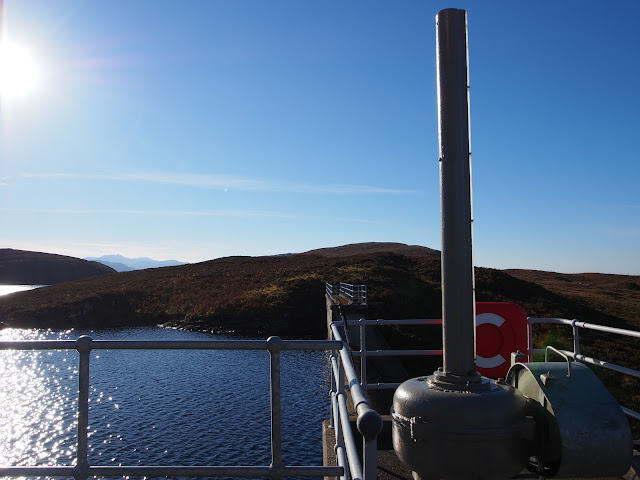 PS. The story has a happy ending! Not only was Niels reunited with his lovely wife he was reunited with his walking pole! Yesterday we returned to the place he was convinced he'd last used his stick. Eventually, after looking in all the places where it wasn't we spotted it on the second dam leaning patiently against the rail waiting to be picked up! Can you spot it? I was so preoccupied trying to shield the sun from the camera that I didn't see it until I put the camera down!
Posted by annie hoff at 14:01

Stunning images of a very beautiful area. It's great that you got a clear day.

A big full on beautiful day indeed. Heart-stoppingly beautiful, in fact. Your photos are superb.

As always, incredible photos, I particularly liked the shot through the tall grass looking down on the loch.
Glad he found his lovely wife and walking stick. I try not to let my husband get out of my sight when we're out walking, he literally has no sense of direction.

Great views.
Such a beautiful place.

Thank You Maria. I've been trying to send you an email to say thank you for following my blog, but for some reason google won't let me?!

Absolutely stunning. And that amazing silence...

Wonderful images and such beautiful, muted colours against the blue sky.

I`m glad that you and your husband found each other before sunset!

Such amazing photographs. You had a stunning day. And I'm so pleased you found each other, and the walking stick! Thanks for your very kind comment on my blog. My thoughts are with your Jo.

Love these walks. Title inspired by 'Today I will be mostly wearing...' from The Fast Show?

Hi Ann, fantastic photographs, the colours are incredible and you have sun!!!!!
Love Jackie.x