Crikey! The under floor heating seems to be working already! 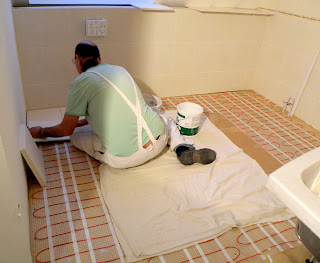 Bryan is tiling the bathroom. He must be the most meticulous tiler on the planet. He's very thorough, and I would defy anybody to spot a misplaced dollop of adhesive or grouting. The tiles are lined up in regimental order. 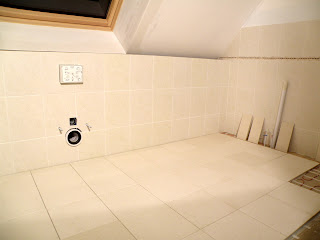 The addition of tiles seem to make the bath room look bigger - it has an uncluttered look and yes, that's right, you've noticed it too, the absence of a loo and sink. 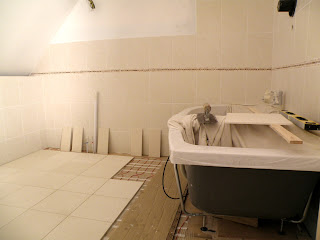 But there is a bath, and we can fill it with a bucket from the outside tap, and heat it up a bit with water from the kettle! Only we can't and we don't as it isn't quite connected yet. 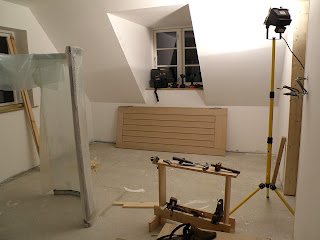 We drove to Inverness and collected the doors on the trailer. Dodo is putting in door frames and hinges and handles - and doors, hopefully! 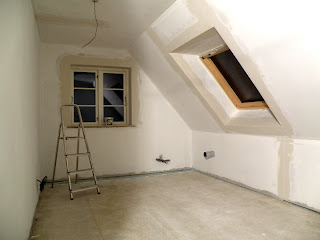 I don't want any future guest to panic, but this is the guest room! I've plastered and sanded down and today I'm painting. The thing I've noticed about rooms, is that they appear quite small until you come to paint the ceiling and then they seem to take on proportions of aircraft hangers in size! Yesterday the electrician came round and they are starting next week with the final fix, which means light switches and light bulbs and heating and the stuff that normal houses have.
I sent a photo of the damaged oven to Ikea as requested. I'm waiting for a response. Maybe they're just lost for words.
We really need and want to move in to the house now. It's so nearly there but electricity and water would make it so much easier
Posted by annie hoff at 08:47

"The People's Friend" magazine dated Nov 15th 2008 No:- 7243, has a picture of Ullapool on the cover and inside on pages 4 and 5 an article "on the shores of Loch Broom"
Do you hope to be in the house for Christmas? Love Phil & Jackie.x

Yes! We have family and friends staying for Christmas and the New Year!!! Becoming more and more anxious!! We are moving in officially from Dec 5th, but still no plumber or electrician! In two weeks driving down to Surrey to bring back furniture in store etc. Sorry about Phil, will send email shortly