Breakfast on the Terrace! 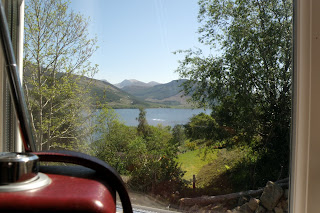 It was a beautiful morning - too good to be indoors 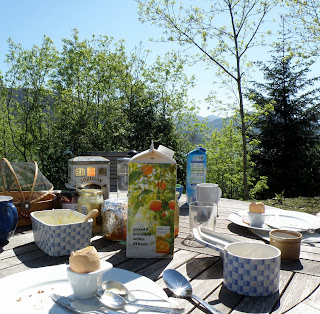 so we breakfasted on the terrace! Now I've seen blogs, I know how it's done, and I know it isn't done like this!
Where's the cafetiere? It's empty and out of view, behind the juice carton. It should be full with a casually placed napkin beside it  and pretty little second hand vase with buttercups and daisies to compliment it.  I blame Niels he set the table! This was taken after we'd finished eating, that lull, while we both tried to persuade the other to take the dirty plates to the kitchen. My plate is the one with the licked jam and honey spoons.At least we use jam spoons, we might be dining on waste land but one still has to have standards!
The eggs are from the hens along the lane and get left  in our  post box on Wednesday mornings by the egg lady

Once we left the breakfast table the sheep moved in. I'm not sure but I think theses are last years lambs. They won't get shorn until around July. Their coats are really thick; the same coats that got them through their first winter in minus temperatures. Now they're quite desperate to get in to the shade, provided here by the caravan. 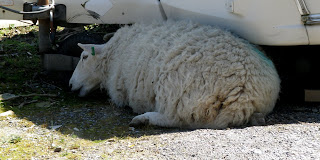 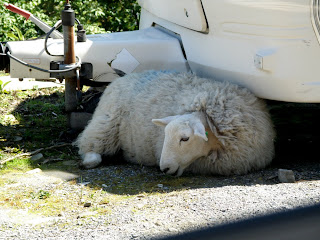 She turned around again and again before finding 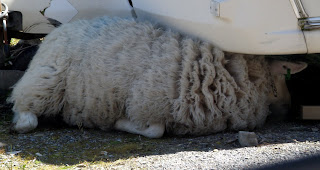 the optimal being in the shade position! 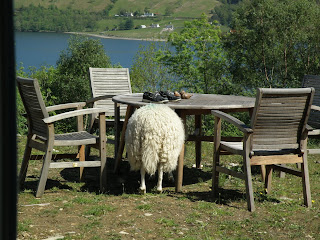 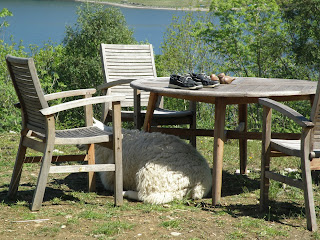 This chap moved in under the table.
The shoes on the table are mine. Yesterday I washed them - yes, I know it's bad luck to put shoes on the table, or is it just new shoes?  I don't remember. Anyway they used to be my boating shoes 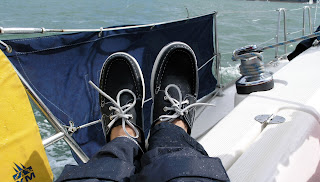 seen here, sailing on the solent with friends. Now they're my painting and decorating shoes that pinch a bit since I washed them.  It's just too warm to decorate and as a way of delaying it further I've joined this group. It's not a good idea when there are so many things that need doing in the house 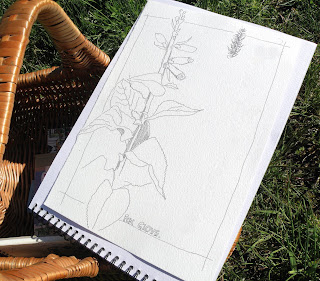 but yesterday afternoon I whiled away the time (fatal) doodling. The garden has literally  thousands of foxgloves that are just coming into flower. They're wild, mainly pink, but they'll attract large numbers of bees - and, so it seems, me!
Posted by annie hoff at 11:44

What a view! Love the realistic breakfast photo. Some places in Blogland are very inspirational/ hard to live up to.
Re professional labels - I wish I was the sort of person who made something, anything, out of fabric and then - and this is the important bit - had a dear little personalised label to sew into the seam.

You'd have to wear it inside out of course - so the label showed!