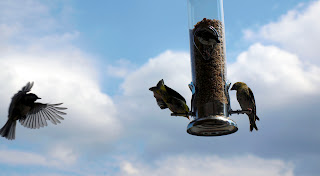 I wouldn't go so far as to say I've mastered the art of wild life photography, or indeed that I've mastered my new camera!  But I have learnt a little about shutter speeds. 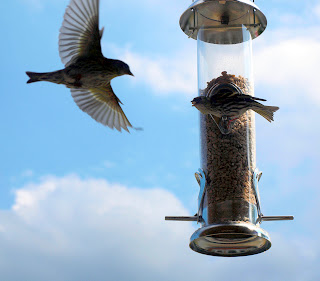 I've also learnt that birds love, and gobble up, at an amazingly expensive rate, sunflower hearts.
At times, most times in fact, providing I can keep up with the tremendously quick turn around. I have two seed containers, filled twice a day, sometimes three times (but then it gets ridiculous) a lump of fat,  peanut containers and a bird table with scraps. Some days I think there must be in excess of sixty or seventy birds, (Niels said it's like something out of a Hitchcock film) mainly chaffinches, green finches, blue tits, great tits and siskins by the herd! They bicker and squabble, and when suddenly they all take off together the 'whoosh' and down draft is considerable! 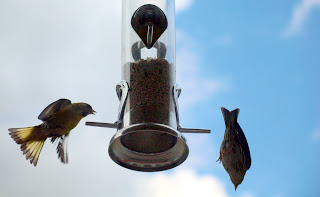 I think the one on the right is just attention seeking! 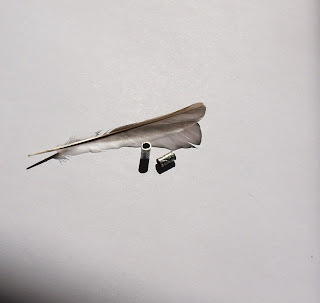 In May, I found a dead siskin, and in June another one. Both were found near the bird feeders, on the ground. I thought at first they had just got too fat to take off but neither bird seemed to show any sign of injury or indigestion. They were both ringed. I'd seen on a recent Springwatch programme on tv  a feature on ringing birds - they showed you how they put the rings on, - they didn't show you how they took them off! It's a little bit gory and involved my needle work scissors!. Anyway for the advancement of research I de-ringed both birds, and took a photo of the rings to show how tiny they are. It doesn't really work though,  because you can't see that it's not an Albatrosse's feather 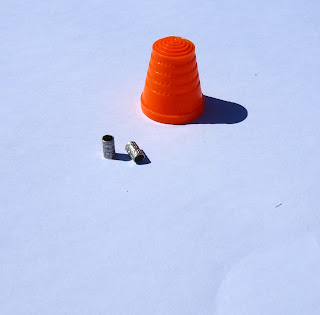 nor that this isn't a giant's thimble. Seriously the rings were minuscule and weighed nothing. I logged my findings on the internet. Both were metal rings the same as the one shown on the Euring website, with a museum address on them, in this case The British Museum, London SW7  followed by a number - I needed my glasses, I couldn't see the rings, let alone read what was on them without them!
I haven't had a response from the ringers, and although I realise these little birds didn't just fly up from London it would be quite nice to know where and when they were ringed.
Posted by annie hoff at 18:17

This is fascinating. Excellent pictures. I'd love to know why the siskins were ringed and what the British Museum had to do with them. Will you do a follow up post if you hear anything? I'm going to have a look at the shutter speed feature on my camera now. You've inspired me not to be so lazy with the auto settings.

Thank you Lucille. I'll certainly follow it up with an update on here - I'm very interested to know myself.
I still use auto settings on the camera - it feels safe somehow! But I do want to know and understand more. I took these through the kitchen window with a lot of back light, and shaky hands! I keep trying to read and understand the manual - it's written in a way that assumes I understand the basics!