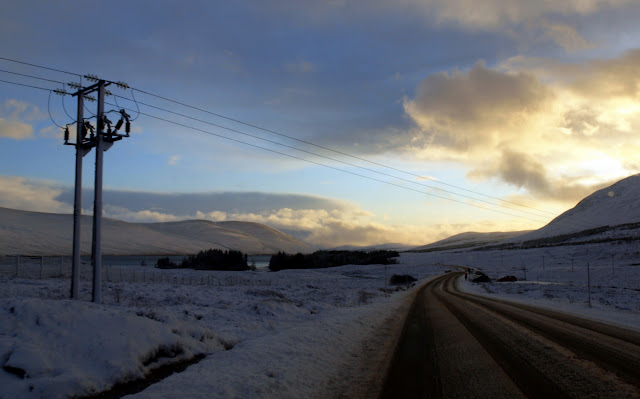 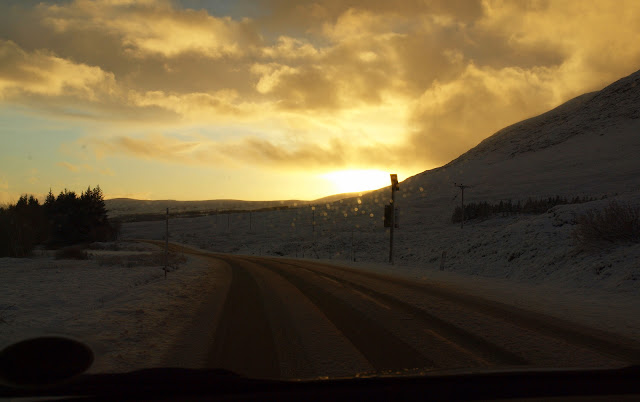 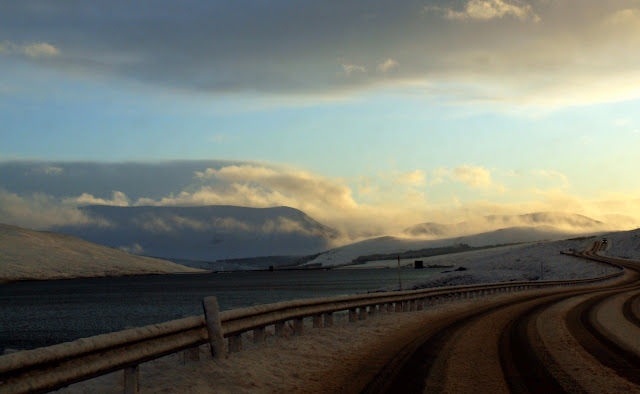 We knew there would be snow. Loch Glascarnoch looked beautiful 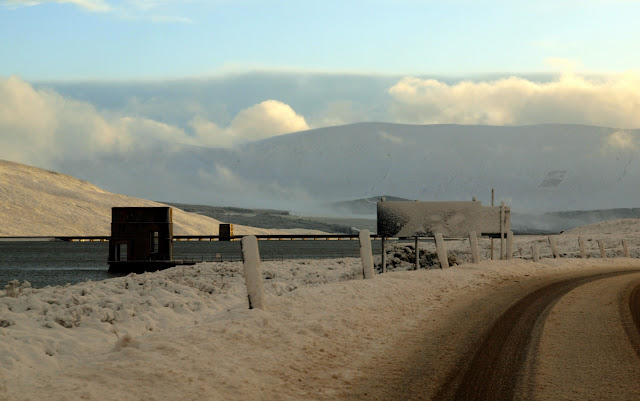 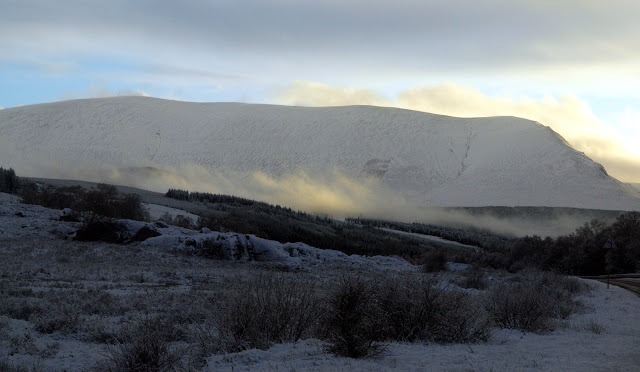 with Ben Wyvis snow clad in the background 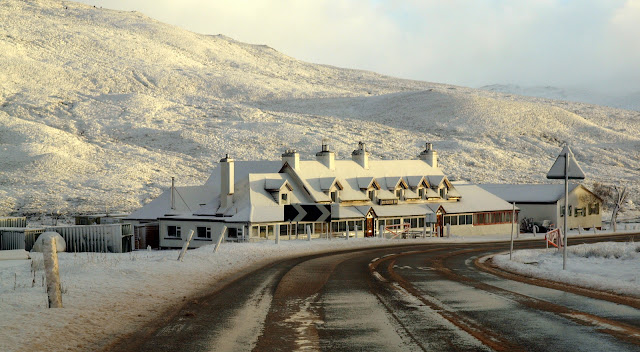 Aultguish Inn lies at the east end of loch Glascarnoch and is closed during the long winter months which was a shame as hot soup and rolls would have been very welcome! 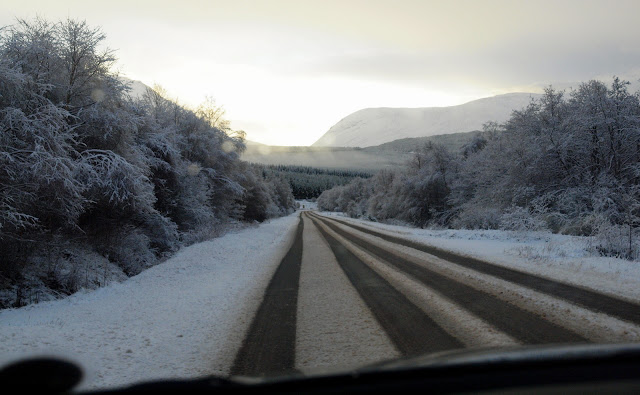 Our journey to Edinburgh was surprisingly stress free and uncomplicated. 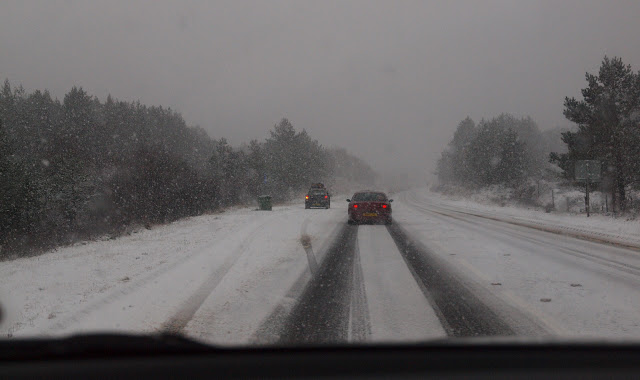 We were lucky. We learned later that in the afternoon part of the A9 near Blair Atholl had to be closed due to stranded vehicles in the snow 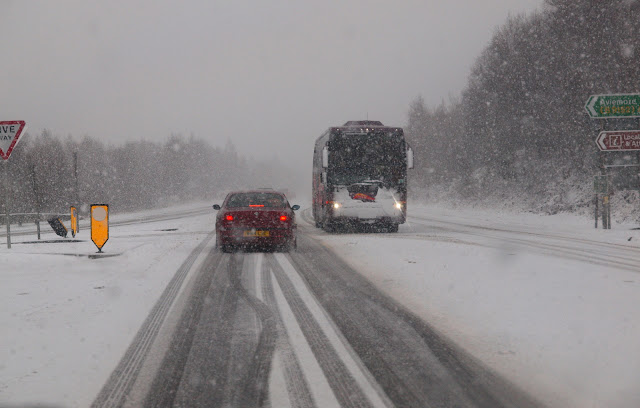 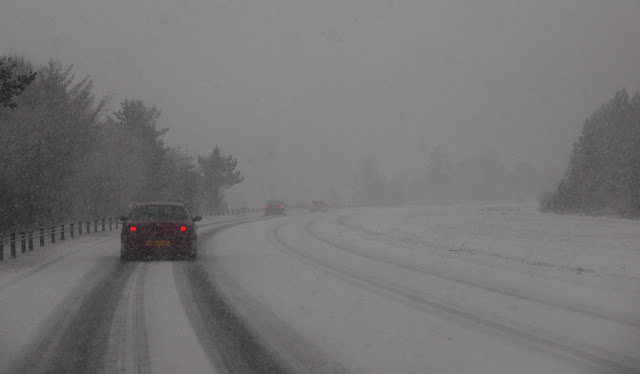 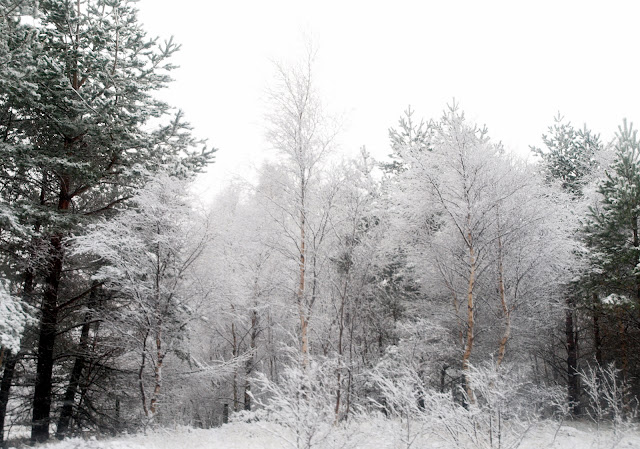 looking out at what was at times 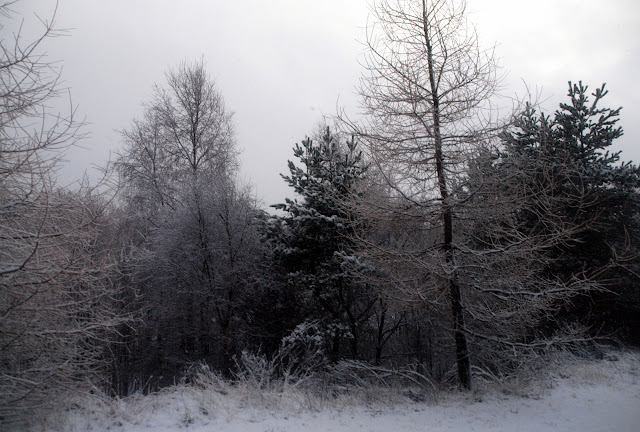 a stunningly white and beautiful landscape 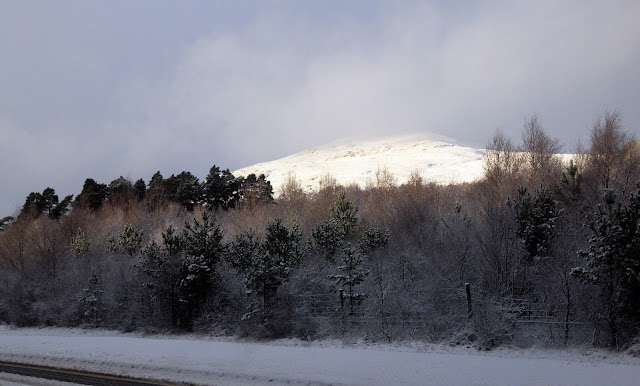 At one point the sun put in a wishy washy appearance 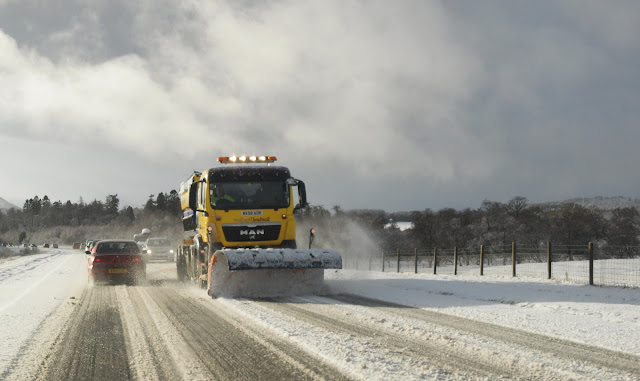 and even the snow plough lit up 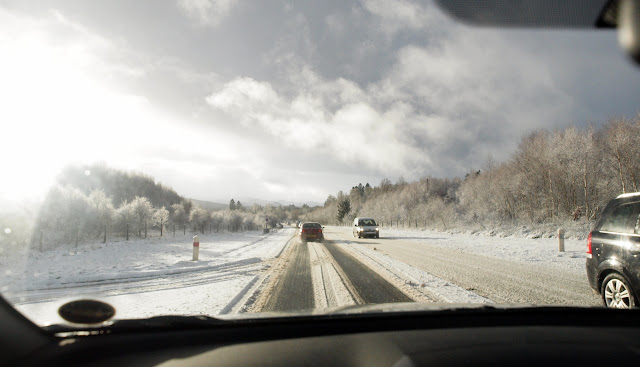 This is the very lazy way to take pictures - not once did I step out of the car - except to change drivers! 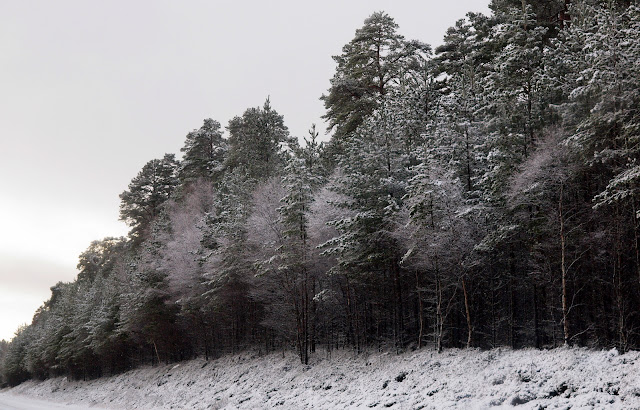 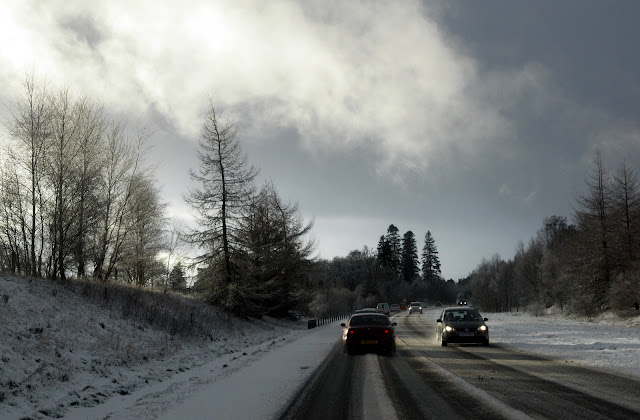 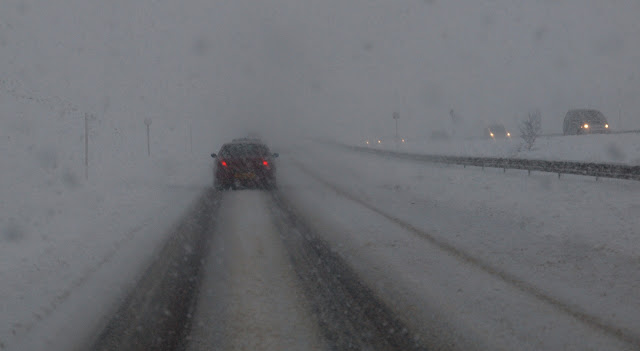 Soon the snow came back. Sensibly no one attempted to overtake on this stretch of dual carriageway!
At this point I think it got so dark and miserable outside I stopped taking pictures. Before we even reached Perth the snow had gone and the rest of our drive to Edinburgh was pretty nondescript.
While we had been prepared for some snow north of Edinburgh we were totally unprepared  for the storm force winds that woke us in the early hours of the following morning. We looked out of the hotel window to see bins and branches blowing along the street. Later we took refuge in Ikea! Surprisingly it was open despite damage being done to cars in the car park by flying roof racks and debris. We saw a number of cars with windows smashed in. We set off for home later in the afternoon once the storm had died down a little. We saw many fallen trees and overturned lorries. The Forth road bridge was closed, along with the M9. The journey home took ages, but fortunately was uneventful. While we tend to do things on impulse I don't think if we'd realised there were going to be gusts of wind up to 102 miles an hour recorded in Edinburgh we would have set off on what was meant to be just a pleasurable excursion after the new year. As it was we arrived home safely and after watching the news and seeing the devastation, we felt very lucky that we had got off so lightly.
Posted by annie hoff at 23:36

What great pictures...I'm glad you braved the elements.

Pleased you made it home! the west coast seems to have been hit hard by the weather - still beautiful though!

Oh! how I miss Scotland when I see photographs like that. It really is beautiful no matter the weather. I spent many an hour on the A9. Glad you enjoyed your trip and arrived home safely.
Happy New Year

Driving in the snow scares me to death. Glad you got home safe and sound.
The winds you've been having are scary too!

The scenery looks so beautiful. I`m glad you had a good break and a safe journey home.

Beautiful, yet to me as a temperate climate dweller the pictures are also frightening. My very limited experience of driving in snow & ice taught me to have great respect for these conditions. Nonetheless, it's wonderful to sit here in Australia and admire your winter landscape.

We've had very little snow so far, down here in the Borders (fingers crossed it stays that way) and we escaped the worst of the winds. Did you see the clip on the news of the huge bin blowing down the street in Edinburgh - scary stuff!!

I'm glad you enjoyed the winter wonderland on the way down, and remained safe during the hurricane on the way home!

Pm my - I hadn't heard about all that snow, although my son, in Edinburgh mentioned the winds. Looks like a very uncomfortable journey. Hope you enjoyed ikea xx

Look out, you're driving on the wrong side of the road! :-) (I remember the first time I drove a car when we moved to England for four years--switching to the left lane felt really fast and really scary until I adjusted.) The pictures are wonderful, as usual. They make me homesick for my home on the snowy side of the Cascade Mountains here in Oregon. I used to traverse roads like that all winter long. What a beautiful area you call home!

So Beautiful and so glad to have found your blog. I hope you have a lovely new year.

So much beauty and yet the damage a storm can cause. Thankful you made it home safely.

Just read this post, now I'm beginning to wonder how my drive from Surrey to Peebleshire will go next week. I don't much fancy snow. However, if it looks as beautiful as your pictures, maybe it will be OK. My sister lives on the borders and was without electricity for three days, with us in the south blissfully unaware!

As I think you know, we came down the A9 later that afternoon and had a blizzard.
I think I recognise every tree in your photos from Aviemore south!