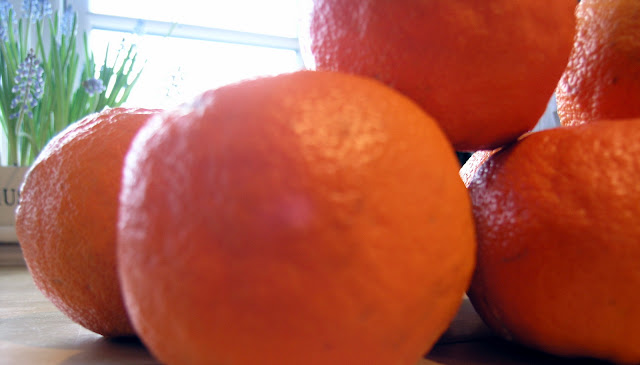 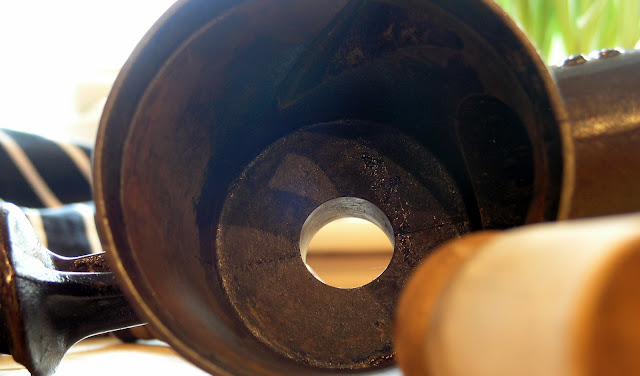 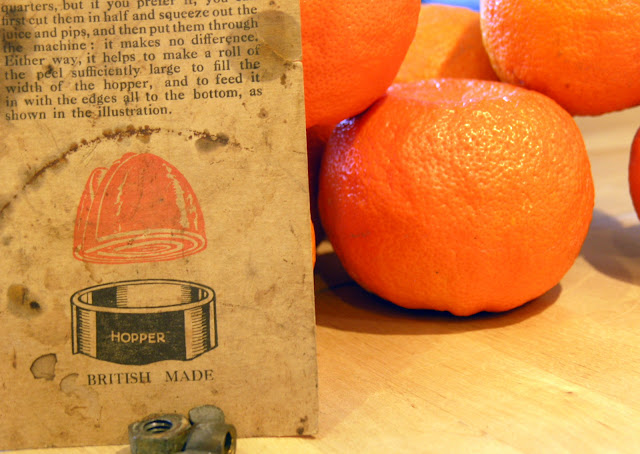 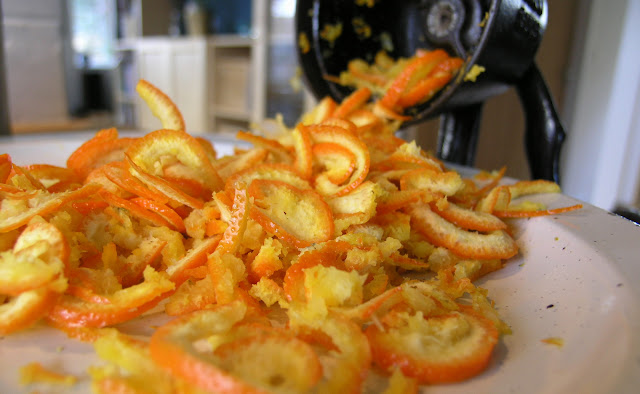 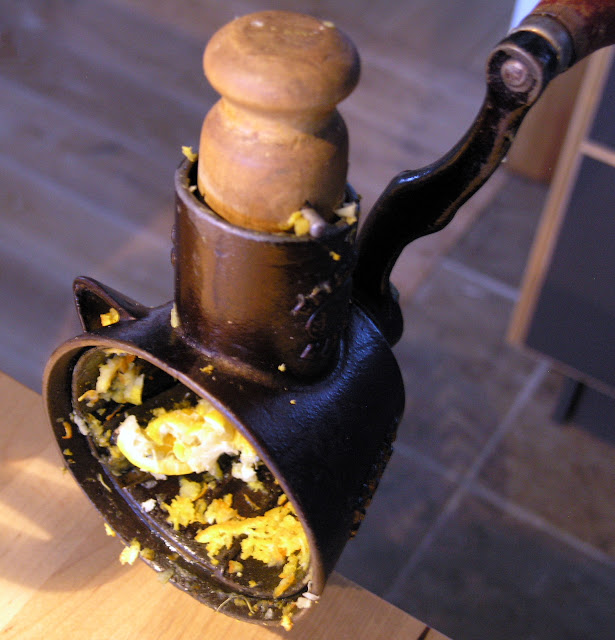 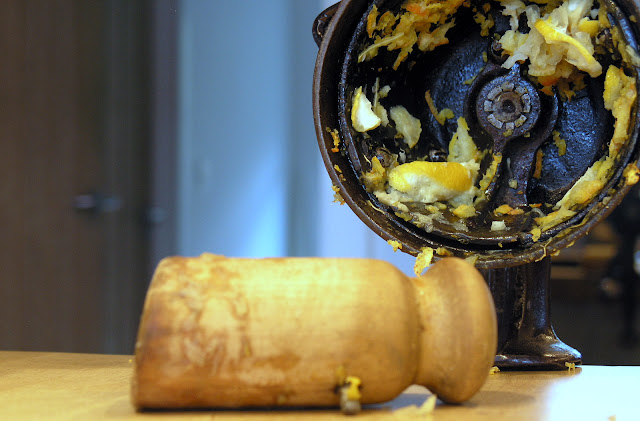 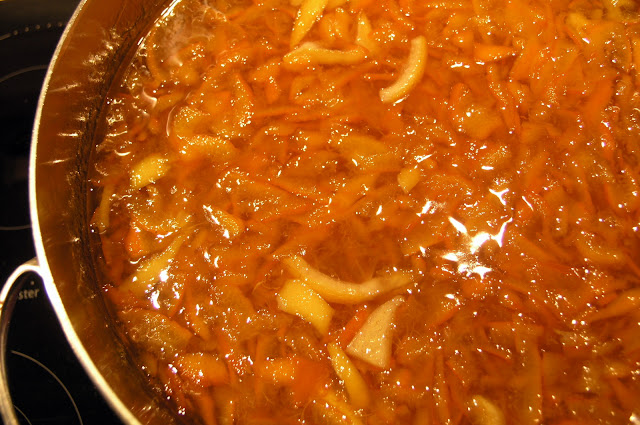 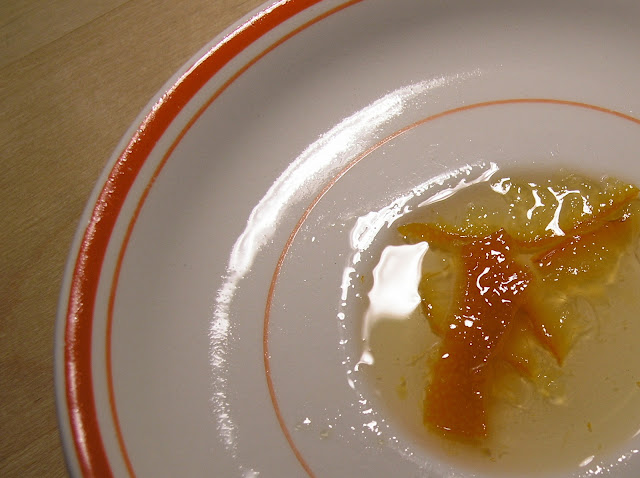 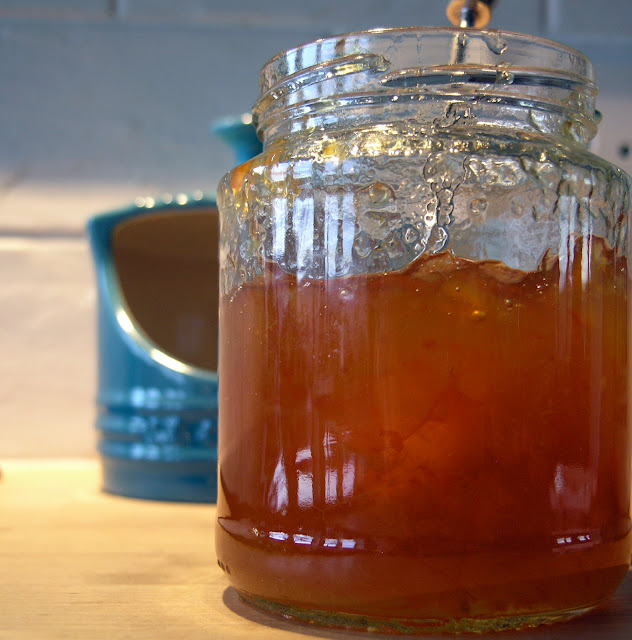 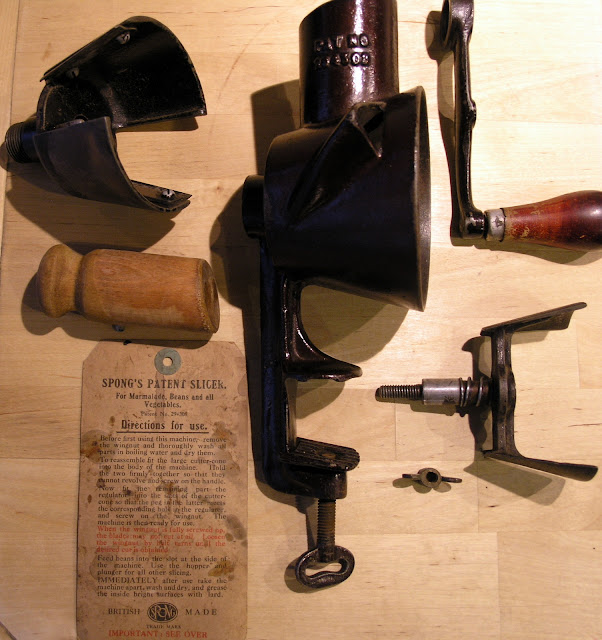 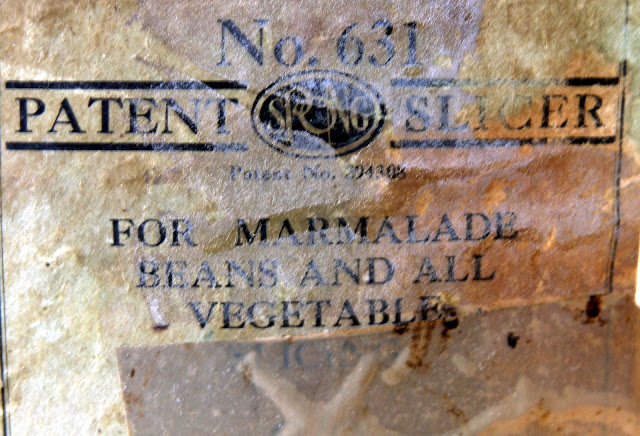 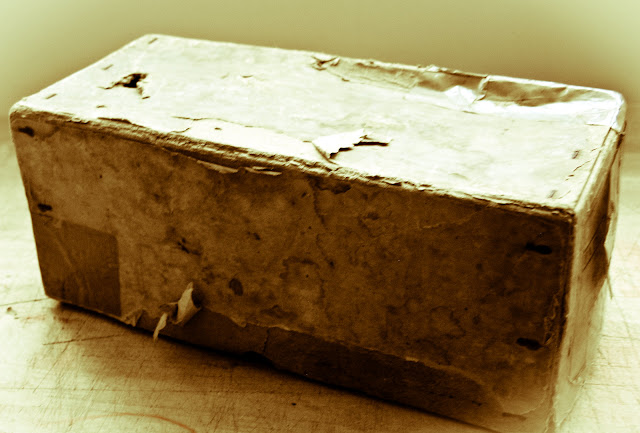 It works! The Spong patent slicer for marmalade beans and all vegetables! Dear Helen gave it to me. It belonged to her mother, and I believe it to be as good now as the day it was new - probably back in the 1950s. No namby pamby plastic here just iron  and a wooden presser to push the orange peel through the funnel at the top of the slicer. It's a brilliant piece of domestic machinery  and has knocked hours off the cutting up time I need  for marmalade making. The instructions suggest that after use the slicer be washed in hot soapy water and coated in lard - I conceded a little, and used ground nut oil, rather a nice one actually from Waitrose, before packing it back in what is, without question, its original box, until next January!

I like it! Often these old tools are much better than modern ones!

What a great contraption! I have fond memories of my mother using a cast iron mincer, clamped to the table, which was also very good at what it did. A little more work than some electrical gadget, of course!

Looks like a marvel. I tried making orange marmalade last year but ended up with orange juice.

It reminds me of one my mother used for grinding different things. It is made of metal and very heavy to life but still works wonderfully.

I remember my Mum having something similar - probably it had been my granny's. Although I love all kinds of jam, I don't like marmalade!

My mother had a Spong. My preferred method for marmalade boils the oranges and 2 lemons whole first. It makes cutting them up a doddle.

Lucille, what a brilliant idea! I could give my Spong to a museum then maybe? On the other hand it's become a sort of friend - solid and reliable!

What a brilliant machine. Cutting up marmalade oranges by hand is such a tedious job. I would love to find one of these in a charity shop!

That looks like a genius machine. But I've given up trying to make marmalade after many years of trying and failing. The ladies at my church are brilliant at it, so I get my supplies at fairs and coffee mornings. Maybe in another few years I'll give it another go, and try and find a machine like this in the meantime!

What a fantastic gadget. I remember my mother having something similar that was fastened to the table top. I have just found one on ebay. National Marmalade is coming up soon, so I should get cracking and make some marmalade.

As soon as I saw it I thought, 'Spong!'. My mother had one (was it compulsory for women to own a Spong in the 60s?). I wonder where it is now. My father gave many things away after my mother died, often without consulting me.
I also remember the Spong being used for making meat loaf.

Wow, it actually works then? And you figured where to put which bits where? I'm impressed. I hope you give Rob some marmalade so I get to try some! What a great machine. Liv