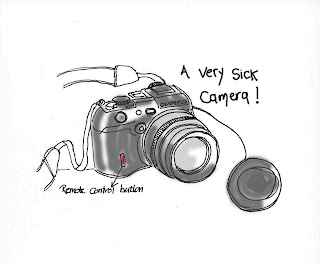 The most awful thing has happened! I've dropped my camera. I can't believe I did it. Well, I can actually. I dropped myself at the same time! Careless or what? The damage I inflicted to myself is nothing compared to that of the camera! As my feet went from under me and I went into free fall, knowing I was about to crash land on rock, the entire life of the camera went before me as it shot out of my hand into the air where it spun round entirely in slow motion, turning over and over as it made its final descent. Oh, and it hit the rock with such a bang and a crash (by comparison I just made a sort of 'ouch' sound) before bouncing off, and landing in a puddle! Bugger (am I allowed to say that?) I've switched it on and tried to switch it off like you do with things that don't work. But it stays on, and none of the buttons work. The only sign of life is in the remote control button, and that just glows blood red. I'm not technical, but internal bleeding doesn't seem a good sign.
Now I have to send it to the hospital for sick Olympus cameras. It wasn't until I drew the camera that I realised what a lot of buttons and knobs it has that I don't know about! And if the camera doesn't pull through I may never know.
Oh dear - I hope it gets better soon. Now I'm going to go and have a glass of wine and sharpen my drawing pencils!
Posted by annie hoff at 17:39

Email ThisBlogThis!Share to TwitterShare to FacebookShare to Pinterest
Labels: Olympus. Cameras. Falling over