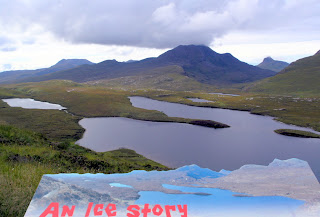 Going back to a time before I dropped my camera! We recently had visitors and took a trip to Knockan Crag. Robin (not ours) is keen on geology and the area we live in is noted for its ancient landscape with rocks of 3,000 million years old. Apparently the Moine Thrust Zone, a geological structure running through the region, is enough to send many a geologist into a frenzy of excitement 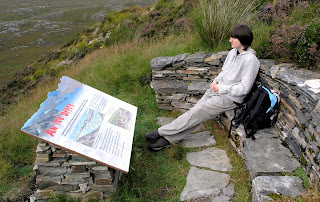 Robin, I thought under the circumstances then, was quite good at actually not showing his at all! I suppose really Knockan Crag is best suited to young children and people like me, who don't know much about old rocks - except they're not good for dropping cameras on. And someone like Robin who already has a good knowledge of geology at university level has advanced a bit beyond the picture board story approach with handles to turn demonstrating the movement of the earth's crust. He probably already knows that the best way to view the earth is to imagine it as a peach, although I didn't quite get that bit! 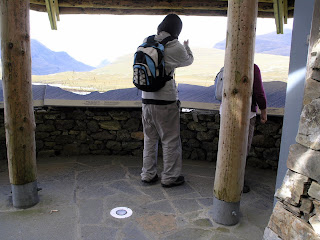 He did get animated at one point, or at least his right arm did, and pointed something out to his mum. 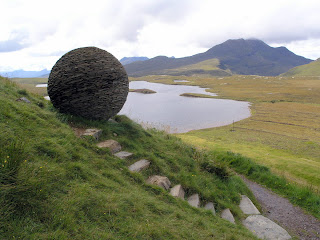 If I was a geologist I'd get excited by this - a giant peach stone? Seriously it's a good place to come to and there is a short circular walk which takes in some beautiful views, well marked along the way with simple facts and figures relating to rocks and structures. What is harder to take in, is the enormous time scale involved in the age of the earth. 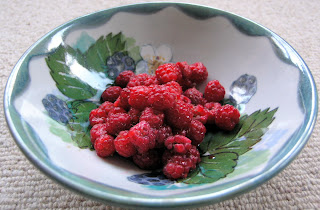 But by far the best thing about old rocks is that they're good for growing wild raspberries. We picked these at the end of our walk. There were only a handful and Robin said he didn't like them because they were inside out (something to do with the seeds being on the outside) that's geologists for you! And we were happy because that meant the rest of us got five each and they were very delicious.
I will be doing an update on the house (sadly still without camera) hopefully later this weekend. Our plumber returned and we were just so happy to see him we forgot to be stern and disapproving - more to follow!
Posted by annie hoff at 14:27