One step forward, two steps back. 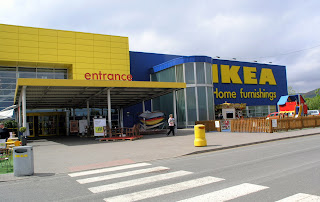 Our plumber has emailed to say he will be here next Tuesday. Would you mind if you're reading this, perhaps just keeping your fingers crossed? It would only be for a few days and could make the difference between having loos and having to keep running down the garden!
Dodo has put in the window sills and finished plaster boarding around the window frames and doors. Then he'll start the tiling in the bathroom.
Niels has been building the kitchen. Progress has been slightly hampered by the unpacking of a number of broken items! Last weekend he 'popped' down to Ikea in Edinburgh (I took the picture when we were there in May - still no camera) and exchanged the broken sink. This week we are hoping to exchange the induction hob with its shattered glass top. This item comes from the distribution centre and not the store, and as you would have guessed involves a whole new set of phone calls and reference numbers and explanations as to why we left it so long before unpacking the boxes - the ninety day 'take back' period is at an end. But for all the moans about Ikea, they have been helpful and sympathetic and appreciate the long drive we have to get there. They could best show their sympathy by opening an Ikea in Inverness, but that probably isn't an option! This morning Niels is fitting the free hanging extractor fan that will be hanging over the induction hob if we had one. It seems enormous and I'm worried it will block out all the light and views, and that I shall knock my self unconscious every time I cook anything. It seems to be very low and generally in the way. But Niels has a plan and has taken down some of the ceiling, which we've only just put up! so he can push the extractor up a bit and hide it. Now I'm worried we'll trip over the top of it on the landing! I'm meant to be corner taping. I would like to say I'm improving but that wouldn't be true. And so it continues!
Posted by annie hoff at 11:00

Hope your plumber turned up today?

No Jackie he didn't turn up - but he turned up this morning (Wednesday) so we forgave him! Dodo who was tiling and who should have been here last week, tore a ligament in his arm (his tiling arm!) so tiling has ground to a halt....Arrrrghhhh!!!!! I will update the blog but at present am painting ceilings. Still waiting for my camera shouldn't be too long I hope!