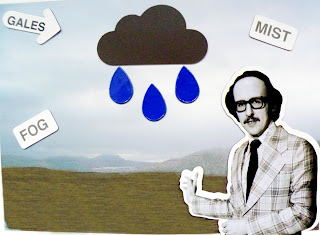 We've had a lot of this just lately. Yes, I agree the raindrops are pretty enormous, but then the rain has been pretty heavy. Better make the most of it though, while we still have it, tomorrow heavy snow showers are forecast! 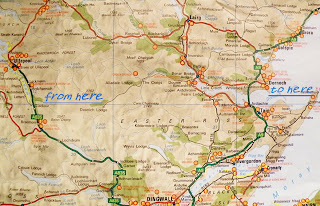 Yesterday afternoon, we decided, enough is enough, and went to find the sun. It wasn't difficult the sun has been shining in most places, just not on the west coast. We drove to Dornoch, possibly more known in recent times for providing the venue for Madonna and Guy Ritchie's wedding in 2000. Typically we took a meandering, going in the wrong direction route to get there. On the map it's just opposite, across the page, but a large lump of nothing sits between the soggy north west and the sunny east coast! 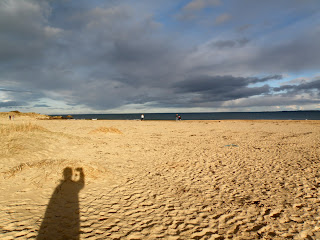 But it was as if summer had arrived when we got there. I felt as if I'd just stepped off the plane. 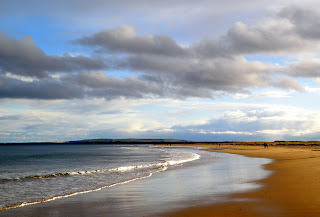 Miles of sandy beach and a glow in the sky 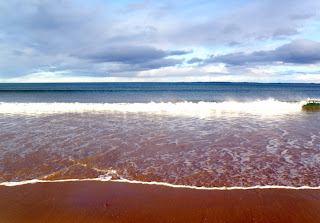 Dornoch has a cathedral, and this photo demonstrates perfectly that I didn't take a picture of it. We didn't walk around Dornoch, preferring to head straight for the beach, park our towels on the sun loungers, and look out for the beach vendor selling coconuts and pineapples. Well ok, maybe it was a bit early in the season. 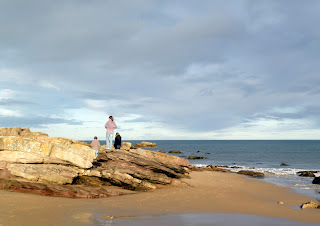 But it was great, just to feel the sun. It was a reminder too of how many places we haven't yet seen and how diverse the landscape is. I love the west coast for it's staggeringly, jaw droppingly, unlike anywhere else beauty that punches you in the stomach, and demands a reaction. It would be impossible to remain indifferent to its gloriousness and remoteness. The east coast however is also beautiful, if in a more rolling and maybe gentler way. Before I came to live here when ever I went somewhere that was lovely I always felt a pang of envy because I wanted to be there too, sometimes my feeling for wishing for something I didn't have, clouded the view. Now views can simply be soaked up - I should say, especially 'soaked up' on the west coast! 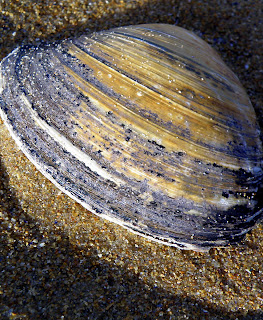 Tomorrow, or the next day, or the day after that, the rain will stop and the views will return here
I hope!
Posted by annie hoff at 14:47