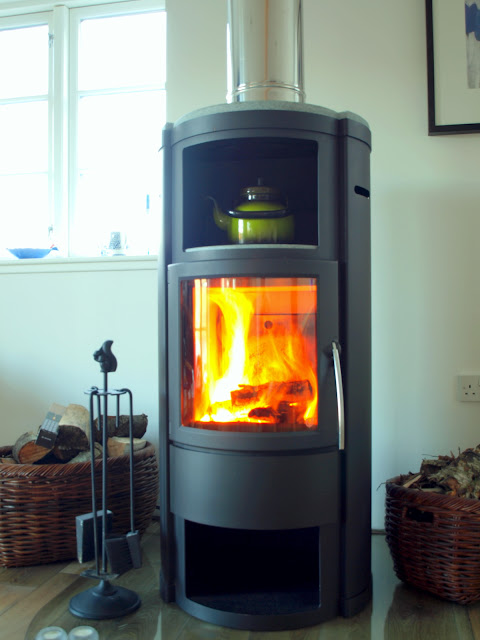 The wood burner has received one or two compliments of late, and without wanting to make him (I'm sure he's male!) big headed I've decided to let him have his own center page spread! 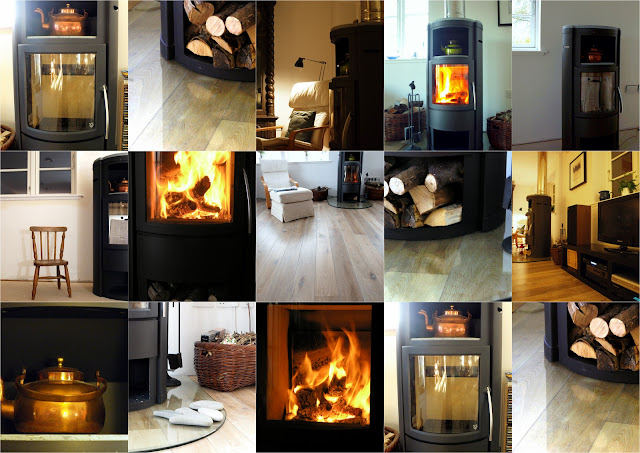 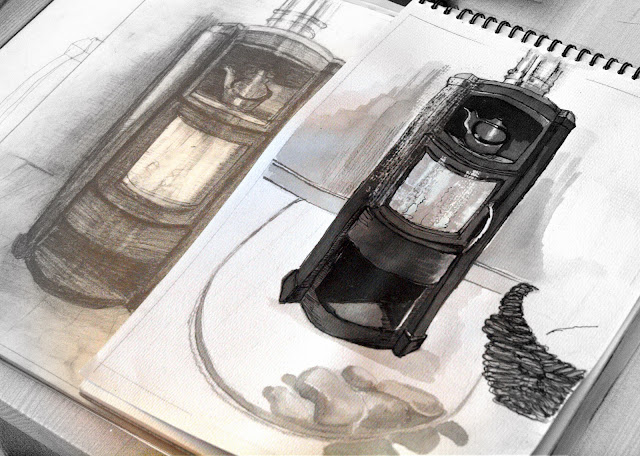 Sometimes he does a bit of modelling.  I'm not very good at drawing him - I can't say it's because he doesn't sit still! 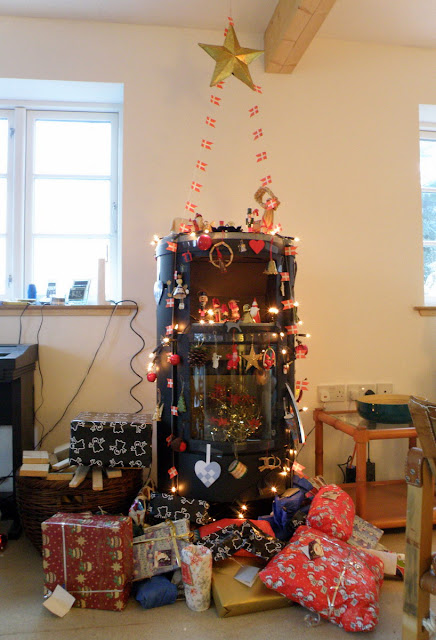 In Christmas 2008 as we moved into the house worn out and completely exhausted he doubled as a Christmas tree. He wasn't  plumbed in then (see, no chimney) We used him as place for putting things and hanging decorations on 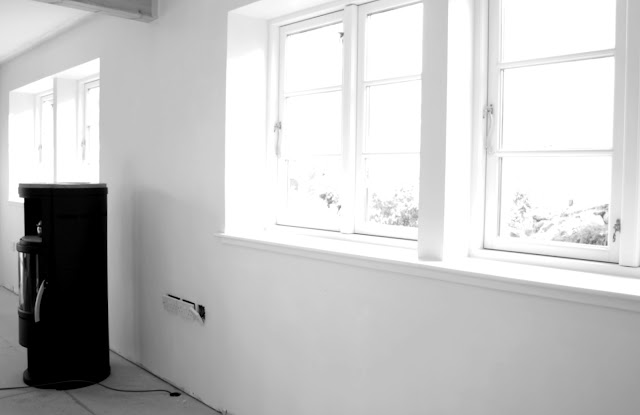 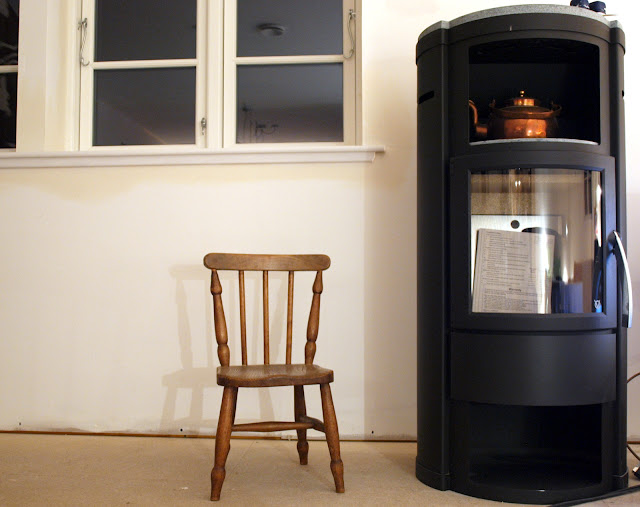 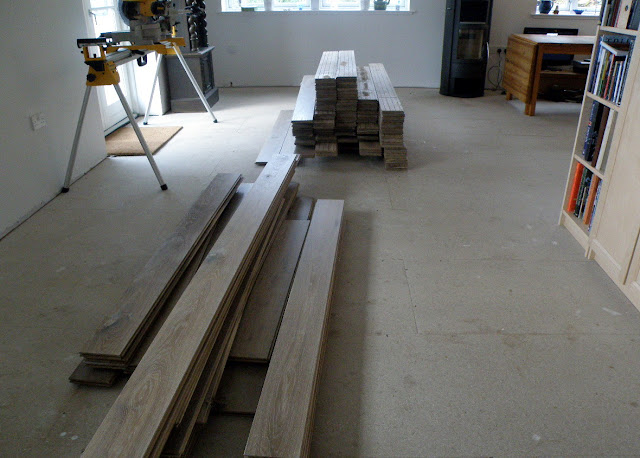 and later that year we put a wood floor down and promised he wouldn't have to wait too much longer before he could be a real fire and not just a table or a cupboard or a Christmas tree. 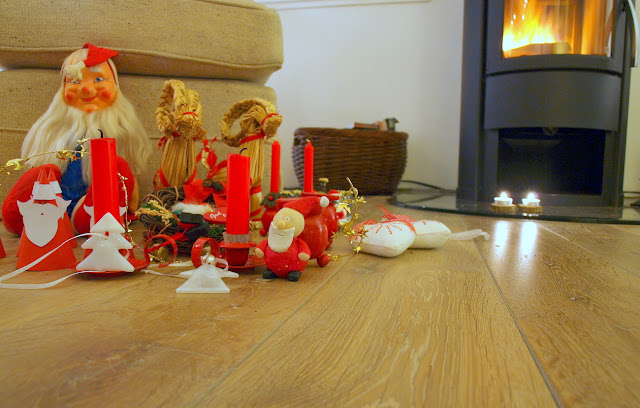 In December 2009 we fitted his chimney 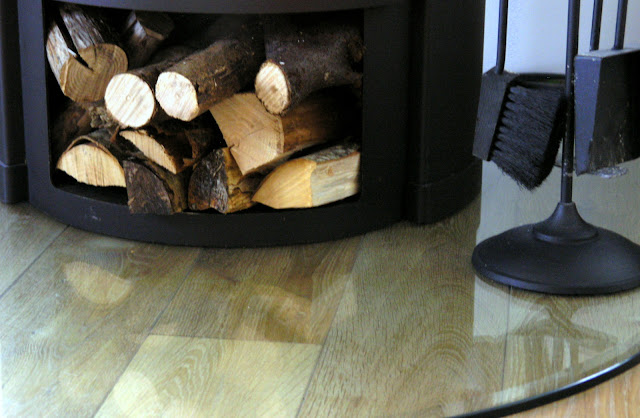 and laid a hearth for him to stand on 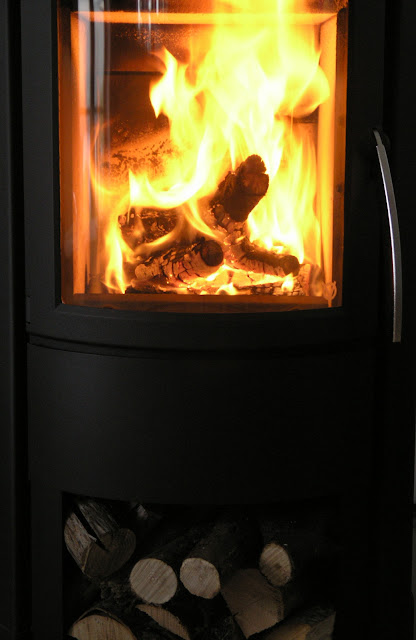 The first time we lit him he showed off rather and within half an hour we had to open all the doors and windows downstairs as it was so hot - we've since learnt not to feed him too much  in one go - a little and often seems to work best. 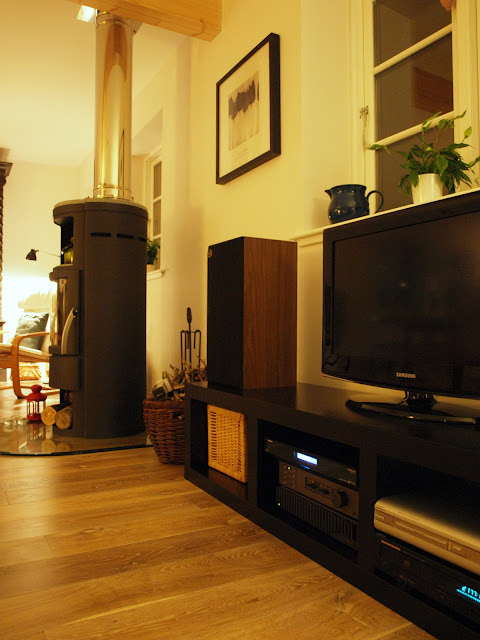 The house is heated with an air to air exchange heat pump. We have no central heating, so no oil or gas prices to contend with. When we were building the house we stuffed it with insulation 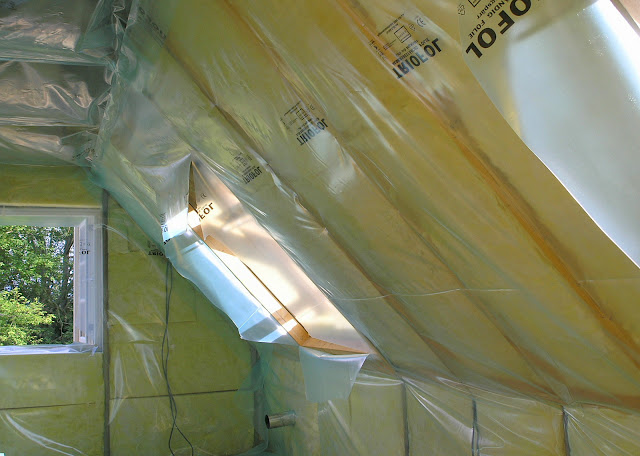 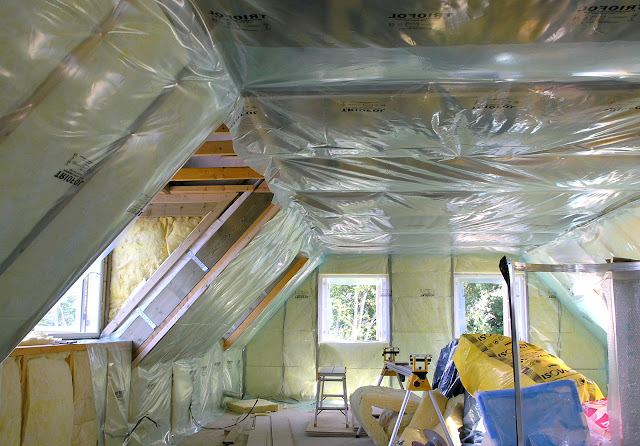 and encased it in a large plastic membrane. I remember how horrible it was to do, feeling itchy and scratchy for weeks afterwards 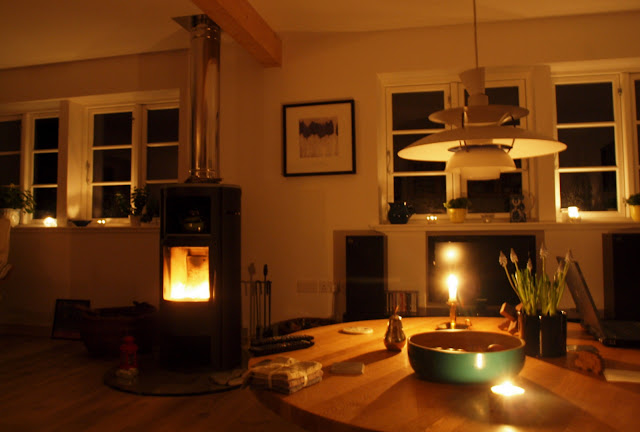 But it paid off. The wood burner does a brilliant job. He's clean and efficient (I wish all males were the same!)  When the lights go out, which they sometimes do living here on the lochside, he keeps us warm and very cosy, we've even boiled the kettle on him. The house is well insulated and combined with the heat pump we need only light him when it gets very cold. He just burns wood, though you can get multi fuel stoves too. He comes from a company in Denmark called Varde. Niels went over to Denmark to buy him in 2007 and brought him back to England in his van where he was put in storage (the fire, not Niels) while we built the house.
Those days seem a long way away now. And I've forgotten how tough it was at times, but it has been one hundred percent worth it and bit by bit we are getting on with the rest of the house - I think (Niels are you reading this?)
Posted by annie hoff at 18:26

Very interesting, does he give off a wood fire smell? I love that smell, we have fireplaces, but they're gas and while they warm nicely they have no smell.
I really liked him as a tree!

He really is a handsome chap! Like you, when we first used our stoves, everyone was just about stripped down to their undies, but now we have got the hang of just keeping them ticking over.

He is very elegant!

Your attic insulation must help so much. We need to do something similar here.

What a great post! Isn't it funny how inanimate objects come to have personalities, especially when they are such an important part of our life?

Fantastic! I love him & your blog!

Thank you! A stove centrefold.

We have been discussing your air to air heat exchanger. Does it power underfloor heating ie does it require wood floors throughout the house, or does it work with carpets too?
(You have our TV)

He is the most magnificent beast. We are lighting ours for the first time tomorrow. I hope you have been able to batten down the hatches and still have power. It's pretty wild down here but nothing like the reports we're hearing of your neck of the woods.