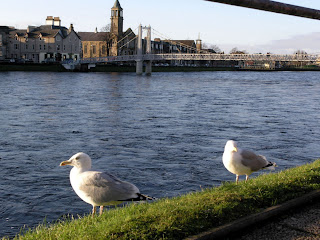 On Saturday we came to Inverness. Yes we do look a bit like seagulls. We needed to open an account with Travis Perkins. I've always wanted a John Lewis card and once I had an M&S card but cut it up for fear of temptation. Travis Perkins doesn't have quite the same ring to it but we had our own personal shopper who showed us round and they do a great range in aggregates and wall insulation and they sell bags that hold a ton - that's a lot of shopping, and it's nice knowing that if I'm having an off day I can just ring up, order a bag of cement and have it put on the account. Next we went to City Plumbing to look at our plumbing needs - you'd think choosing taps would be simple!! And a loo is, after all, just a loo, but it all depends on whether you want it wall hung, high level, low level, back to the wall, close-coupled, half flush, full flush, siphon jet, reverse-trap flush and at about that point we had to leave as I really needed the loo so we went to Pizza Express for lunch, and had a bowl of olives and some garlic bread and pasta and drank red wine and felt very cosmopolitan! And their loos were very nice, but I didn't like to take a picture in case I was asked to leave. 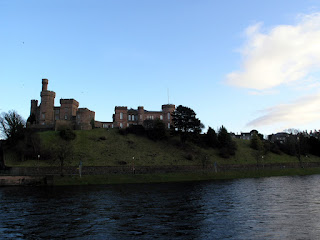 The River Ness Very full and fast flowing, it flows into the Caledonian Canal 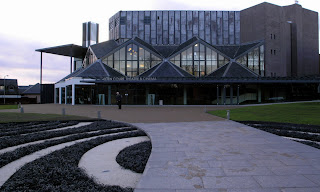 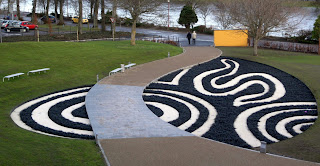 This is a snake (I think) in the garden of Eden 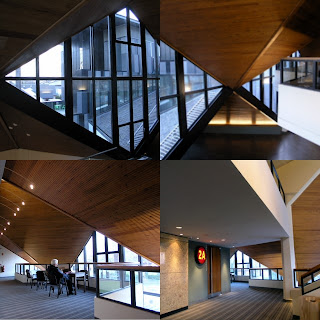 The roof of the theatre is made up of triangle shapes. It reminded me slightly of the Barbican Centre in London, though I don't know why as I don't remember the Barbican Centre being triangular. But it has a light and spacious feel to it with a good use of natural materials.
And something to look at on each level. 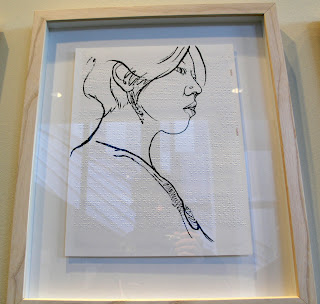 I liked this. It looks as if it's been drawn on a sheet of braille. Hopefully by clicking the mouse on the picture it will enlarge, and make it clearer. 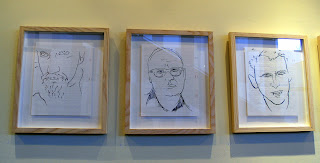 Maybe the braille describes the portrait, but behind the glass, it wouldn't be much help to the person who couldn't see. 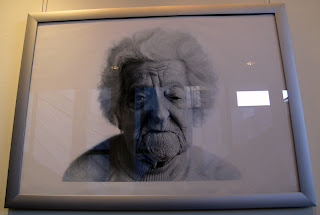 And - No, before you ask, I'm not looking in the mirror, but I think she's got a great face. 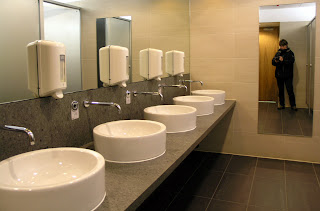 Here I am though. These are the nice clean sinks in the ladies' loos in the Eden Court theatre. And nobody around to escort me from the building. I think if we had these in our new house we'd make a mess, we need something bigger, more trough like. We won't need five of them though or the bathroom may end up looking like a cow byre.
Posted by annie hoff at 15:13

For a trough like sink you need a Winchester one I believe. Jackie knows what they are called. Used mainly in modern kitchens as opposed to bathrooms.

Thanks Phil. We're looking for both kitchen and bathroom, surprisingly Ikea had some 'trough' like sinks for kitchens, at a reasonable price. I've looked at Winchester sinks and like them very much. This project has the potential to go way over budget unless we keep a tight hold on the purse strings!

Sorry that should have been Belfast sinks Anne not Winchester. Duh!!

Sorry too Phil - I thought you were talking about a butler sink - confused or what!

A Butler and a Belfast sink are the same.!! How about buying one from Ebay?

99p for a brand new one , auction finishes in just over an hour!!

I thought so too Jackie - but not according to the 150 catalogues and brochures we have on kitchens and bathrooms! We need 4 sinks and are trying to resist buying until the house is up as we simply don't have storage space, but thanks for that and will keep ebay in mind nearer the time.