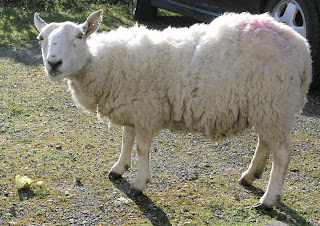 When I first became acquainted with Lamb chop I thought she was just another one of life's losers! Scruffy, bedraggled, always hanging around, ever hopeful for the the odd hand out. But I've since concluded she's just one very smart sheep! 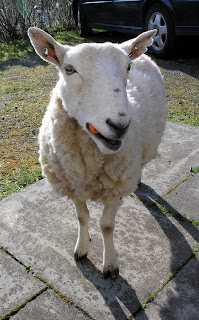 She comes round most days, and stands outside the kitchen window, calling out in a rather tuneless, urgent 'bahhhhing' sort of way. 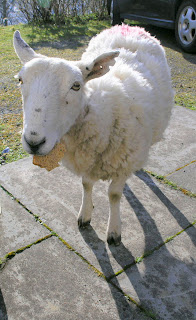 I go out side and join her. I sit on the step and we have a chat - well, I have a chat, Lamb chop has an eat. She's partial to a number of things but she loves bread. She's not fussed whether it's stone ground, multi grained, soft batch wholemeal or granary, from Tesco or the bakers, just as long as it's in big chunks to go down. She eats apples and carrots as well, and last nights salad and cabbage stalks, all the vegetable peelings , but not potato (I don't like to give her those.) She's far more effective than a dustbin 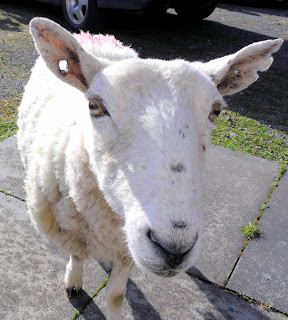 She's very inquisitive, (can I eat this camera?) but at the same time very timid. Sometimes she lets me rub her muzzle. Her ears appear to be made up of holes and serrated edges 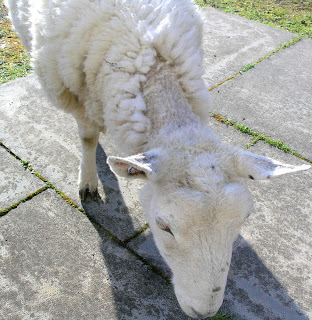 She's also unraveling a bit at the neck - a real scruff bag. Apparently sheep rub their wool off with their continual efforts to reach the greener grass under the fence. Living here it would have to be the tree on the other side of the fence always has more bark! 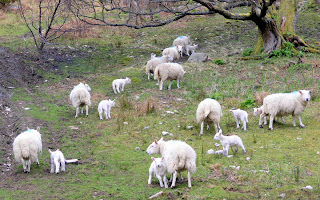 Up and down the lane lambs are being born at an amazing rate. Some mums and babies just graze by the side of the lane, others are in fields, and others just roam on the hillside. 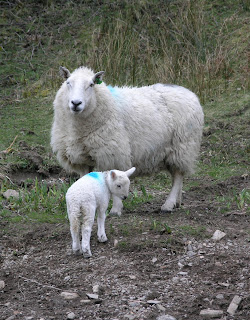 The sheep are very protective of their young. Some days there is a constant calling of mums and their off spring, who not noticing the distance, have wondered out of range. Each mum knows her baby and if a lamb tries to latch onto the wrong mum he's shown no pity and gets short shrift. 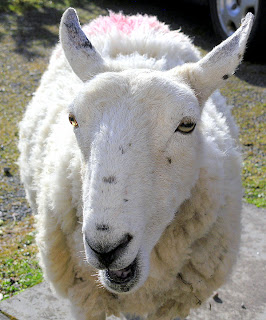 I've mentioned all of this to Lamb chop and asked her if she intends to be a mum. She is looking wider just lately, although Niels says that's because she's eating all his food. I'm under no illusions regarding this friendship. It's totally one sided. I'm a sort of mobile larder, a meals on wheels. I'm not sure what Lamb chops reply was when asked about motherhood, she had her mouth full at the time, but I think, I thought she said she'd rather come in and have a cup of tea and a jaffa cake!
Posted by annie hoff at 10:09

Hi, found your blog whilst looking for contact details. I have some sponsored walk photos I would like to send you. What an interesting account- well the boys couldn't believe all the info on the sheep for a start!!
Must catch up with you soon Marie x