Autumn here is beautiful. I had to drive to Inverness today to buy more tile adhesive and grouting. Once, I used to go to clothes shops, now I've discovered trade counters, tool shops, and builders merchants. I browsed the aisles at H.I.S (Highland Industrial Supplies) turning over things on shelves, looking at bargains, trying on tool belts (only joking!) and eventually found the very thing I needed - a Centre Punch. I have no idea what its real use is, but I'm going to bash the end of it with a hammer and hopefully make room for the grouting on the shower room floor tiles by hacking out the large amounts of unwanted stuck on tile adhesive! 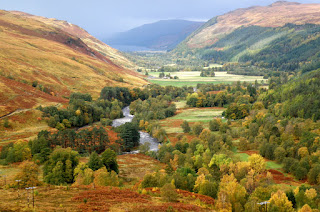 On the way in I stopped and took these pictures with my new camera! I learned last week that Olympus had made a mistake and couldn't in fact repair my old camera. As a good will gesture and probably because I started sniffling down the phone they said they would send a new one for the same price as the repair of my old one - and throw in batteries and a battery charger. I think I got a bargain, as even at the cheapest price the camera is worth more than the cost of the repair. I'm getting used to it. It does all the things that the other camera did and more, and in many ways is simpler to use. I don't like the 'on' and 'off' switch and the one big disappointment is the fixed monitor, which makes high or low angled shots impossible. I haven't yet managed to focus using the super macro function but over all I'm happy and it's so nice to have a camera again! 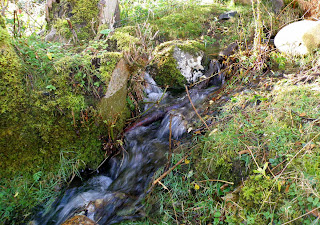 Last night there were gales and torrents of rain. This little burn running through the garden has been empty through the summer and is now full again. 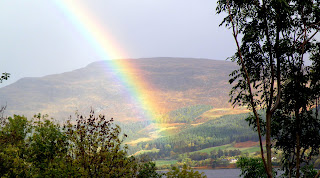 I can watch the weather come up the loch, it changes in minutes and with the sun and the rain comes an almost constant rainbow 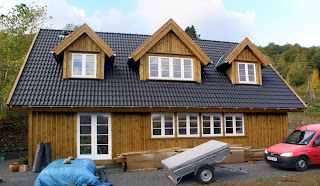 And the house? Oh that old thing! That's still there. I've grouted the wall tiles in the shower room and Niels is laying the tiles in the kitchen and utility room with regimental, and methodical precision ie. slowly!
Posted by annie hoff at 18:29

Hi Hoffs - I've been away a week (up to Edinburgh) and on my return find there is heaps of stuff on your blog, including all the interesting stuff about tiles and grouting. As we hope to embark on a bathroom make-over some time soon, I am very interested. Your home is make very swift progress it seems, so pleased for you both. Thinking of you lots. The Thains

'Swift progress..!!' That's so nice of you to say. It feels like it's taking an eternity, but bit by bit it is happening. It will make a big difference when we get light and heating!