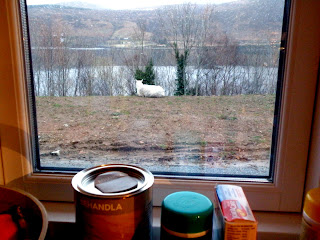 I'm a little bit worried about lamb chop. She spends most days sitting out in the garden chewing.
Maybe she's enjoying the view? Perhaps she imagines she's found herself a nice grassy patch to sit on? She sits and waits for the odd crust of bread/mince pie to come her way. She's started limping quite badly and I don't think it's just the sympathy vote she's after. All her friends have different colour markings on them and seem to belong somewhere. Lamb chop seems to be on her own with no stamp of ownership on her rump. She started limping last week and her knee/knuckle joint looks swollen on her right leg. I keep hoping it will get better and am trying to give her healthy things to eat. Niels says we should buy some hay. I have thought about inviting her in, but I think in the end I'll have to let a farmer know and I don't think they'll treat it and I would hate to be responsible for her end. She smells of a wet woolly jumper straight out of the washing machine and she always comes trotting/limping up when she sees the car arrive. She would have been brilliant in a nativity play. I've looked in the pet selection in Tesco's but they don't do anything for sheep. She's started eating the bird seed I put out. It takes her ages but she's very persistent. I can't see it can be very filling though. 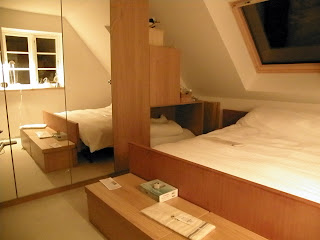 On a cheerful note we now have a bedroom! No curtains, carpets, knick knacks or other such niceities but it's a start and wonderful to have our own bed back after nearly two years! 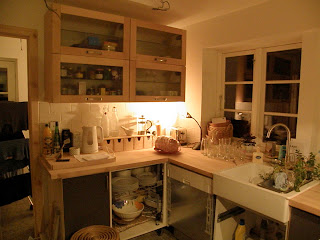 The plumber is coming tomorrow - yes, he really is! He turns up when he says, which takes a bit of getting used to! The kitchen sink will be finished tomorrow. The shower room is finished. We have a loo! The bathroom is half finished. The dishwasher door on order. My washing machine works. Hughie is coming back tomorrow to put in the down lights. My microwave oven is being delivered tomorrow. The children arrive this evening. Then I need to put the house in order, it is a total, total mess, with loads of things still in boxes and furniture still to be built (sometimes Ikea isn't such a good idea!) There's no room to put anything and I wonder why after two years we kept so much rubbish!
Then all I've left to do is the christmas present shopping, food shopping, get a tree, and find the decorations!! No, I'm not joking!
Posted by annie hoff at 20:11 4 comments: 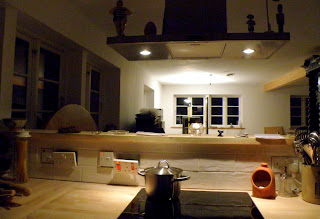 I forgot to mention a most important point! When we came back from Manchester on Sunday (14th Dec.) our electrician Hughie had finished the second fix on the electricity and hooked us up to the mains. We may not have water yet but life is slowly becoming normal again. Niels is able to rustle up tasty little suppers (or is that my job?!) We have an induction hob which is brilliant.It's almost impossible to keep up with the speed it boils stuff, it seems even quicker than gas - is that possible?
Seriously, electricity is a huge step nearer to completion on the house. When we turned on the heat exchange system it worked! No one was more surprised than us. It simply heats air coming into the house by air going out. The house is so well insulated that even lighting produces heat.
All the weeks taping up and sealing holes made in the plastic membrane seemed to have paid off. We will save enormous amounts on oil and other forms of heating
Posted by annie hoff at 20:04 No comments:

This has to happen! 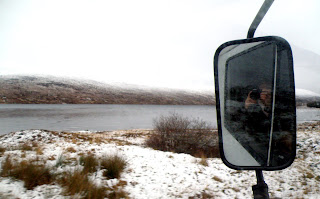 A week ago, maybe less, on the 12th Dec. we turned our empty truck around and headed back to Manchester. We celebrated Robin's 30th Birthday feeling very old, jigging about to tunes we didn't quite recognise but nevertheless feeling very grateful to have been included and to meet some of his friends. 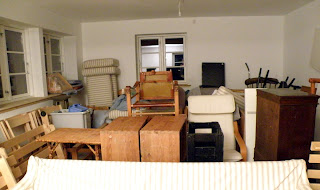 A comment on the blog from a friend saying they were looking forward to seeing rooms with furniture. We can, and will do better than this, but for the time being this is what we look at each morning, wondering how we can fit it all in, where it can go, and do we really want it? 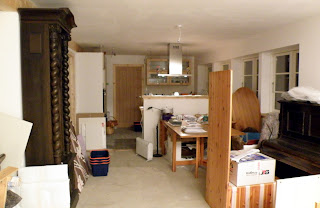 I'm on count down. This will never be organised in time for Christmas 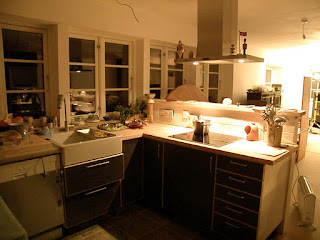 Our children arrive on the 22nd. Our friends to celebrate the New year arrive on the 29th. The plumber is coming tomorrow! I'm desperate, but reasonably confident, (I think) that we will have plumbing by then. I do hope so. I've had crossed legs, and everything else for so long now. This just has to fall into place next week - otherwise I'm giving up!
Posted by annie hoff at 18:54 No comments:

A Bunch of Packers 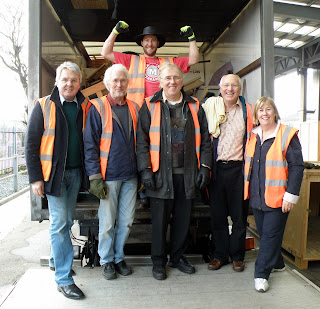 The most wonderful thing about friends, is that they show up when you most need it and lend a
hand and do the things you otherwise would have struggled to get done on time. They made a huge difference to getting the truck packed efficiently and in some sort of order. Thank you chaps and chapess, we just couldn't have done it without you. 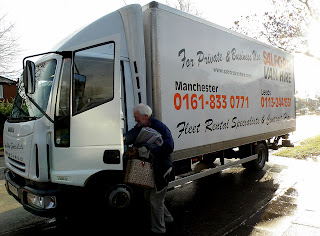 A week ago we drove to Manchester and picked up an enormous lorry. It was 7.50 tons but seemed at least twice the size. And even bigger as we drove it to London and negotiated narrow side streets in an effort to find some friends we had invited ourselves to stay with in Kingston. Friday evening, driving in the dark, uncertain of the length and width of the vehicle, turning round in peoples driveways, clipping wing mirrors, hitting lamp posts, while negotiating a divorce settlement and wondering whose crazy idea it was to even contemplate attempting to move ourselves in a large truck is not something to be recommended and I don't want to do it again! 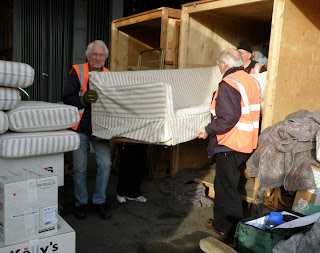 On Monday morning after recovering with said friends and several bottles of wine and good food we drove in slightly dented lorry to the out skirts of Guildford in Surrey and started the packing! 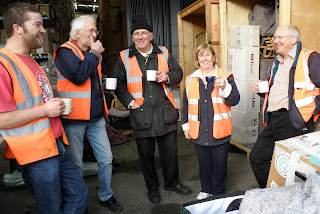 We had coffee and mince pies thoughtfully provided by Pauline 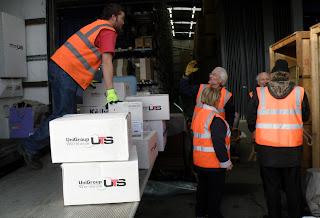 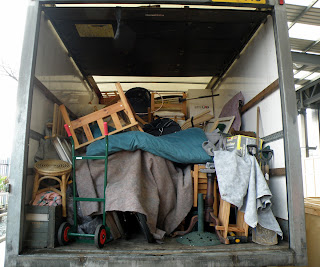 It crossed my mind that the end result looked similar to the stuff you take to the tip and I wondered why we had it in storage for the last two years! 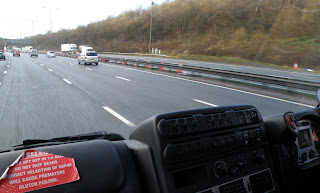 On Tuesday we started the long slow drive back to Scotland, stopping overnight in Lancaster. The lorry had a speed restrictor on it which while good for our furniture made driving tedious and slow.
Today we had more help in unpacking the lorry and getting all the furniture and boxes in to the house. No pictures I'm afraid I was just to tired to even go and hunt out the camera. Tomorrow we drive the lorry back down to Manchester to celebrate Robin's birthday. Our son will be thirty tomorrow!
And guess what - still no electricity or water. We have officially moved in to the house. The electrician says he's coming tomorrow and the plumber (the new plumber) came yesterday and says he'll be back. But hey....what's electricity and water when I've got my red shoes back, all my saucepans, drawing books and rotary clothes line!
Posted by annie hoff at 18:09 2 comments: 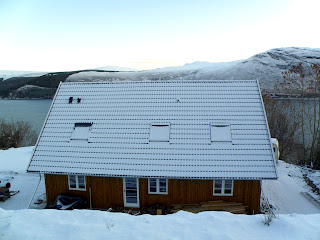 This is all well and good, and very pretty, but, tomorrow we are driving to Manchester and the weather forecast is not very good 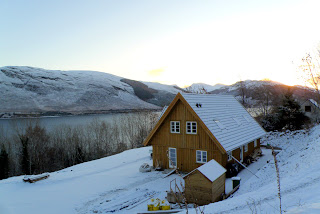 More snow on the way I think. Maybe it could go away and come back next week instead?
Posted by annie hoff at 09:46 1 comment: 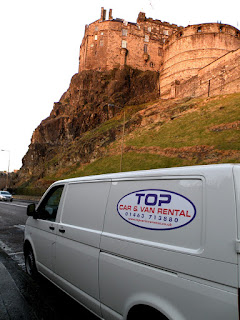 I haven't blogged for weeks. I think it's a combination of feeling exhausted and never finding the time to get out to the caravan - the blogging centre!
Last week we hired this van and drove to Edinburgh through snow, ice blizzards and fog. 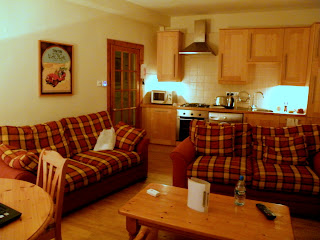 We stayed here, in our own apartment just off the Royal Mile in the city centre; booked through lastminute. com and highly recommended. You get your own flat which is just like home (though not like our home because ours isn't finished) with a washing machine and probably ironing board if I'd hunted around more - a perfect weekend break! 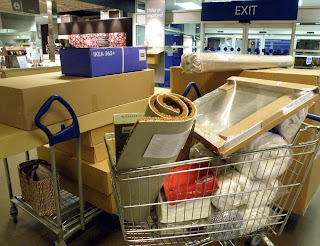 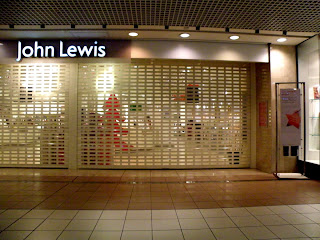 On the second, we sat out side John Lewis waiting for them to open, and in the afternoon in our shopping frenzy returned to Ikea 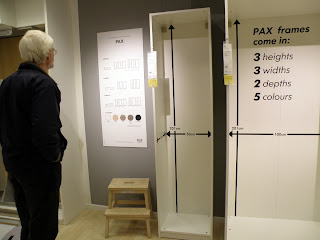 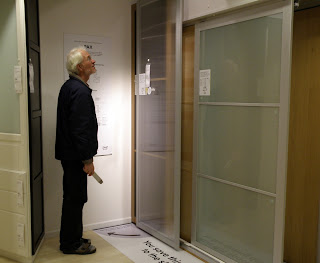 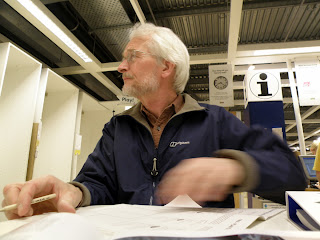 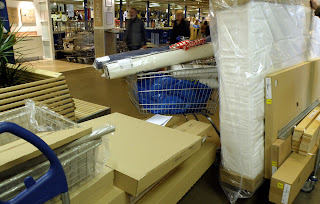 We managed to produce three more trolly loads of 'stuff' and items in cardboard boxes with names we didn't recognise. Niels thought the bed side tables were names of danish towns. If you have ever shopped in Ikea you will know that the receipt bears very little resemblence to anything you have bought! 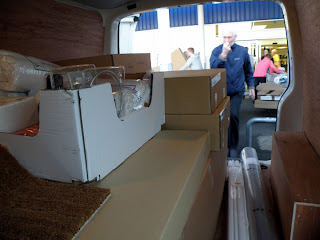 when it came to packing, we wished we hadn't bought with such enthusiasm 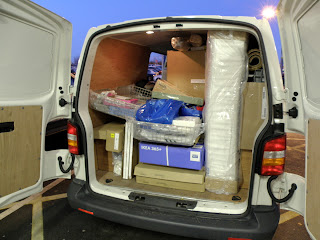 but finally as it was beginning to get dark the huge pile of unfamiliar anonymous boxes, mats, bags and trays transferred from the pavement to the van in regimental order, followed by our selves for the long drive back to Letters through snow, ice blizzards and fog. 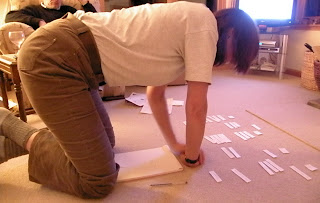 Just before our Ikea trip, Helen came to stay. She did a time line with us. I think this involves listing all the things you need to do, cutting them out, and putting them in order of priority. It soon became apparent that the line was longer than the time we have. We have lots of little pieces of paper with tasks written on them, relating to the number of jobs that still need to be done in order to complete the house. Some of the tasks are part completed which means I'm not supposed to discard the bits of paper until they're finished. I've gone round with the vacuum cleaner once or twice and may just have 'tidied up' a little in an attempt to feel more in control! 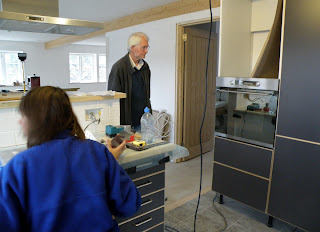 Helen was brilliant, and did loads to help. She spent a lot of time on her hands and knees tiling the floor and kitchen walls.
On a sad note we have lost our plumber. We really hacked him off regarding a late large bill we couldn't pay. When the funds finally became available and we cleared the invoice he decided he'd had enough. I shall miss him, he was great at what he did, and generous with his time and help. I'm sorry he shan't be completing the work.
We now have a new plumber who has been to see what needs to be done to give us a loo, a dishwasher, a shower and all the essential watery requirements.
Ollie has been back up and fitted more sockets and plugs. He and the electrician have been working together.
On Thursday we shall be driving down to Manchester to pick up a hire truck, then on to Guildford in Surrey to pick up some of the furniture we have in store. We'll then drive back to Scotland, off load our furniture and return to Manchester with the van where we'll spend the weekend of the 13th Dec. celebrating Robin's 30th birthday.
The house still looks like building site, but now needs to be made cosy and comfortable for christmas with family and friends coming to stay. It won't be completed by then but I think it will be ok - if we just have a loo!
Posted by annie hoff at 19:47 No comments: