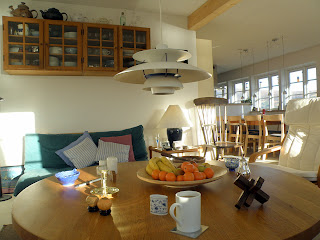 Now the sun is much higher in the sky it clears the hills behind us, and on sunny days streams in through the windows. In the very darkest shortest days of winter we had sun for only an hour in the morning. Now it stays around for much longer, lighting up the room and dancing on the walls - showing up the bits I missed when painting! 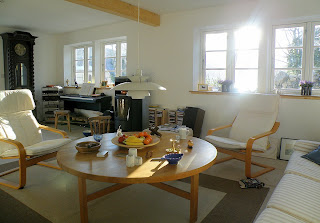 This first year in the house will be tracking the sunshine! 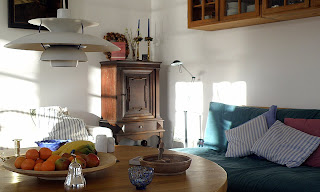 There is still masses to do, and of course I can be selective in what I show on my blog! 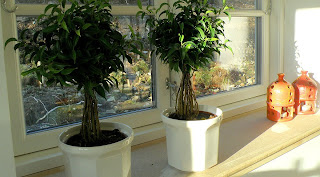 the window sills, for example, still need their coat of paint. I opted for good old mdf painted white. I'm slowly preparing them and priming with an mdf primer. I've done two so far!

The wood burner (the one that doubled as a Christmas tree) has yet to be installed. First the floor needs to be laid - a rather big expensive job, particularly as I have chosen oak. I did look at bamboo and other sustainable flooring, but oak has such a mellow look, and I think will suit the house perfectly 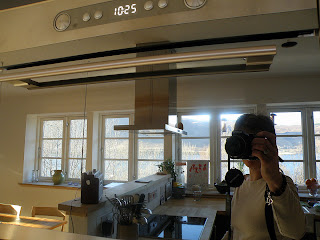 Still the wonderful view goes on. Here it is, looking in through the oven door! 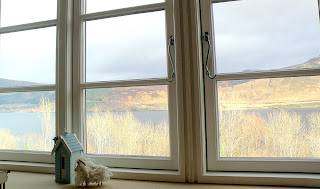 and in my space upstairs (slightly less muddly than it was, and due a photo soon!) this is what I see as I'm writing this blog and looking through the window. The colours today have been beautiful, vivid and strong. The tree branches have an almost white, silvery glow to them.
Posted by annie hoff at 14:52 2 comments: 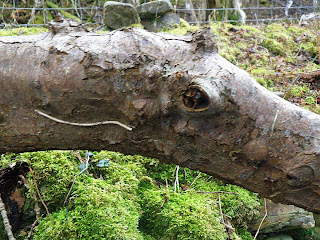 I was startled to suddenly come face to face (eye to eye!) with this little creature at the end of the garden. He was as startled as I was. He didn't attempt to move and made no sound. 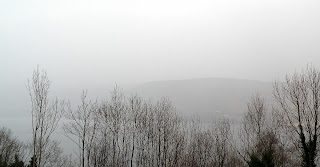 The day started misty and moisty. 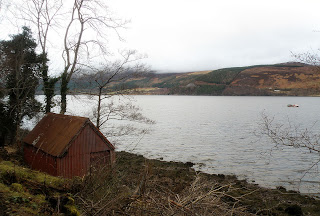 I'd gone to the bottom of the garden to look for the first signs heralding the end of winter, slippery frogs, snow drops, tree buds. 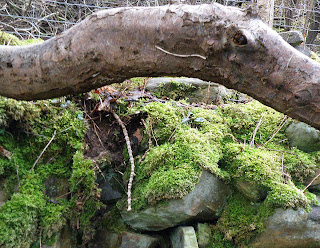 Instead I came across my first ever sighting of a tree horse. I must look them up. Do they live in the loch or on land? Do they eat moss, or lochbroom prawns?
I found one, very wet slippery frog, but no real sign that winter has given up lochbroom, yet, except that birdsong is loud and clear in the mornings, the birds are pairing up - will the tree horse canter off and find a mate?
I doubt it, somehow!
Posted by annie hoff at 18:57 No comments:

Making letters in letters - and marmelade! 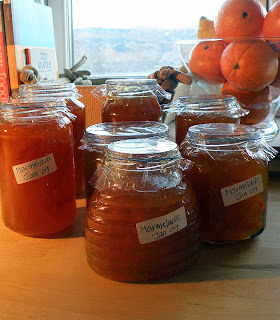 You must 'click' on the text to read it! And even then you may find it difficult! 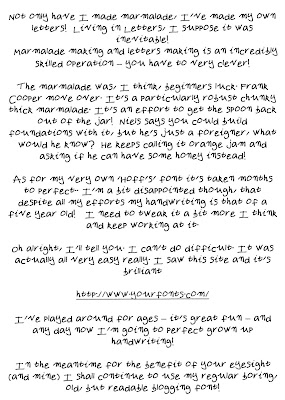 The website is http//www.yourfonts.com and you can while away hours, if not days
Posted by annie hoff at 20:34 2 comments:

The view from my kitchen window. I think you'll agree it's not bad! And it makes peeling potatoes more bearable! I took this at around 5pm yesterday. The sun is climbing higher in the sky each day and as it goes down it just highlights the mountain tops. 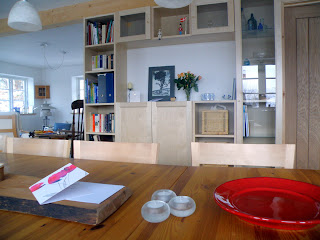 We managed last week to make the journey down to Edinburgh - Ikea beckoned! The following day they closed part of the A9, not because we'd shed a load of bookcases, but because the snow arrived in force. We have spent this last week building orderly bookcases. This is a sort of book case/unit in the dinning room. I've managed to unpack more boxes of 'stuff' and immediately fill it. we had a massive turn out of unwanted things before we moved up here, but we still seem to have those want/not want, items we don't know what to do with.
Today I'm starting to decorate what will be Niel's office. I'm the chief decorator, Niels is the chief bookcase builder. 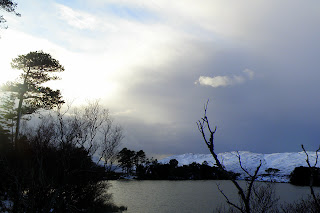 We haven't yet been snowed in, although we did have to dig the car out of snow at the weekend. We drove back from Elphin on Saturday evening on a very snowy, icy road. Elphin is about 15 miles north of Ullapool. We'd been invited for a meal and when it was time to go home a fresh fall of snow made driving slightly hazardous. There is only one road, and even if it's gritted, without traffic, it soon snows over.
We haven't had torrential rain and floods. No train cancellations in Ullapool, (there aren't any)
I think, so far, we've been lucky. The house stays surprisingly warm even without the woodburner. With the freezing temperatures we've had, we've kept a small electric fan heater on downstairs to boost the heat. The next major job will be laying wooden floors and installing the fire.
Posted by annie hoff at 08:20 3 comments: 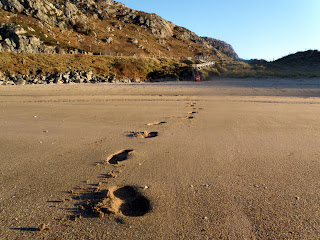 I love this beach. Today's weather was walking on the beach weather. I used to think Gruinard Bay was about an hours drive from us (it's a little more to the south west) since living here and driving like the locals it's now only half an hour! 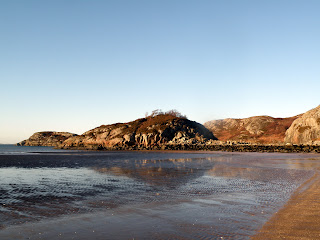 As on most days it was pretty empty 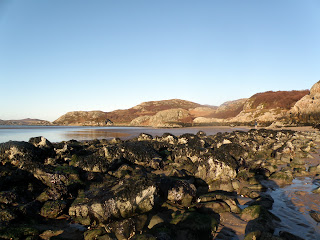 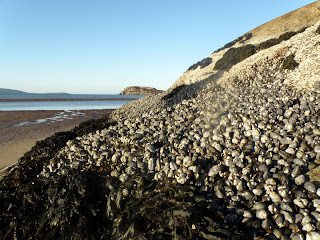 What struck me, looking around was, what a lot of order and pattern there is to nature 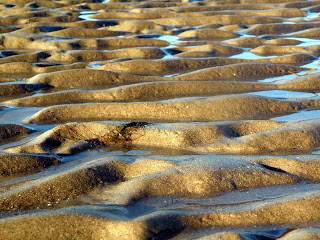 I want to hang this on the wall 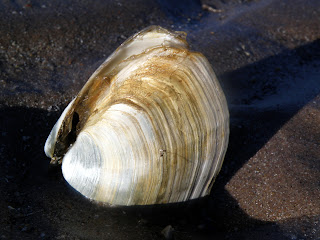 even shells have such symmetry in their design 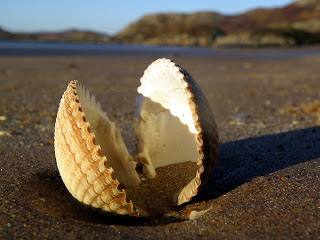 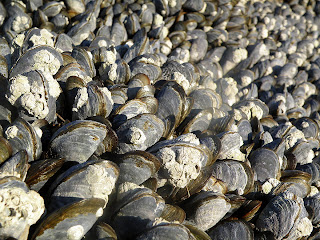 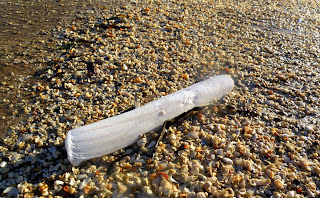 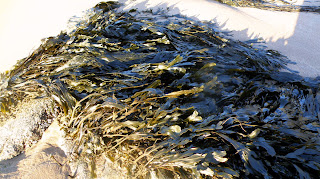 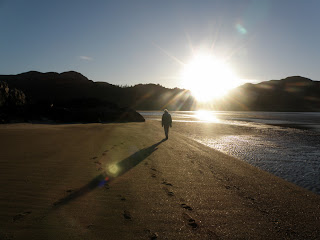 Our order by comparison seems chaotic! The house still looks as if we moved in only yesterday! Having completed out tax returns we see we are due a tax rebate. With that in mind we shall be heading back down to Ikea this week to stock up on cupboards and storage space - then we too can have order and patterns and symmetry in our lives - maybe!
Posted by annie hoff at 18:37 No comments: