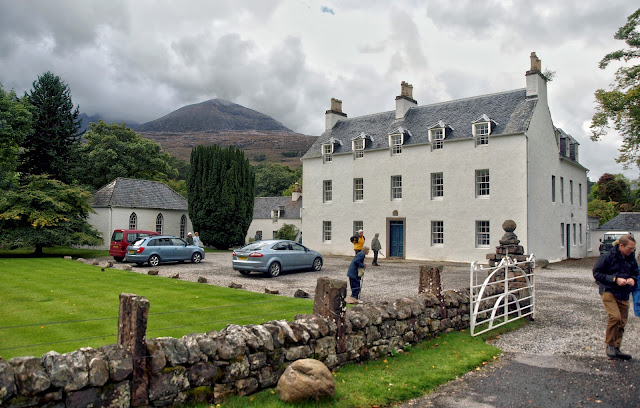 Back to Dundonnell House for the Garden Open Day. 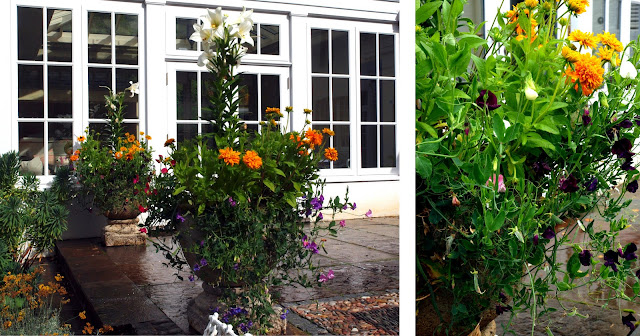 Lady Jane wasn't selling tickets at the gate this time, but she'd left her garden in very good hands. 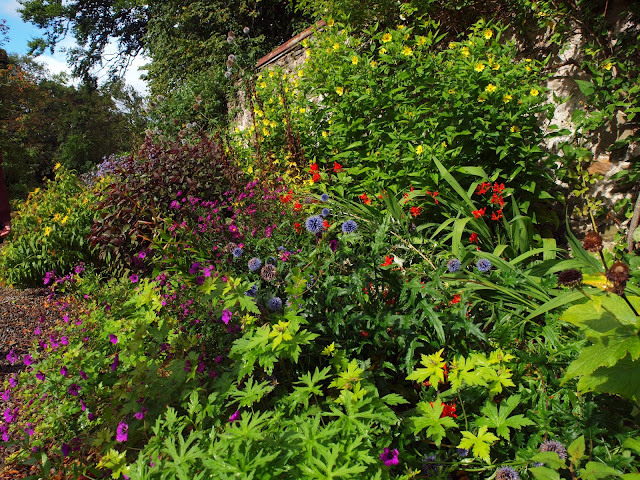 On the other side of the wall it was as if winter had arrived, but in the inner sanctum that is Lady Jane's Garden, a riot of colour and late summer flowers fit to burst were singing their socks off.

I loved this garden in spring, I love it in late summer too. 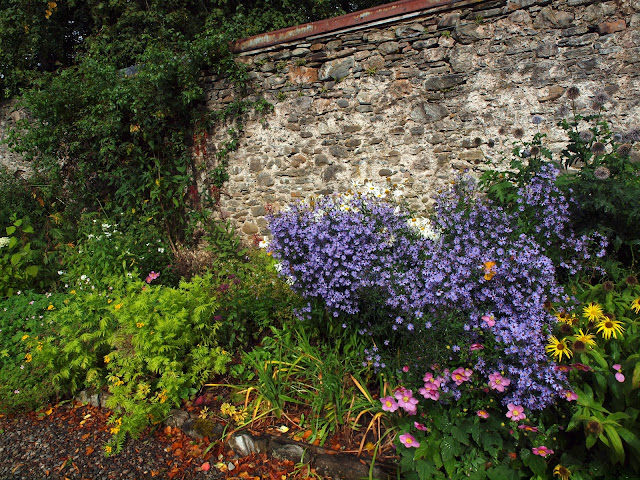 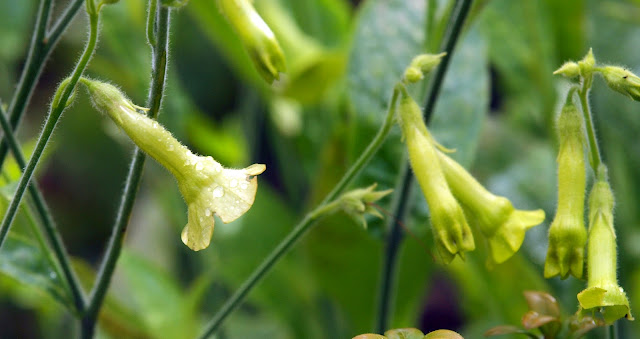 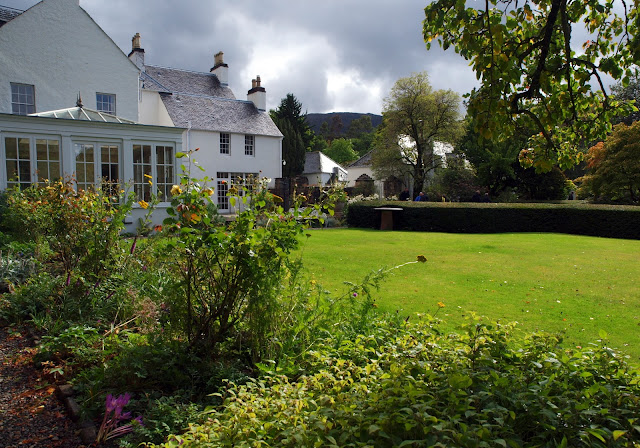 Mistletoe on an apple tree. We were surprised to see it growing so far north -  the mistletoe, not the apple. 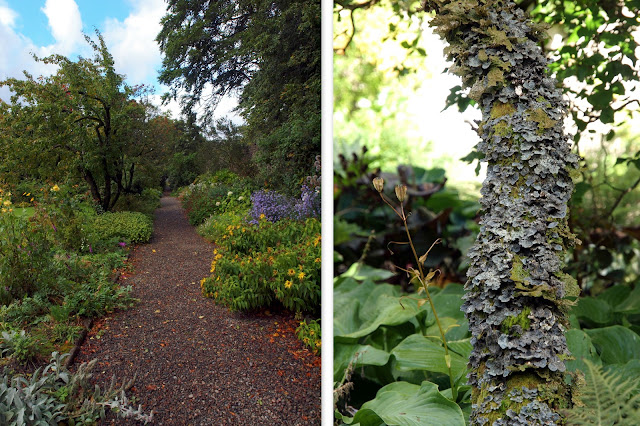 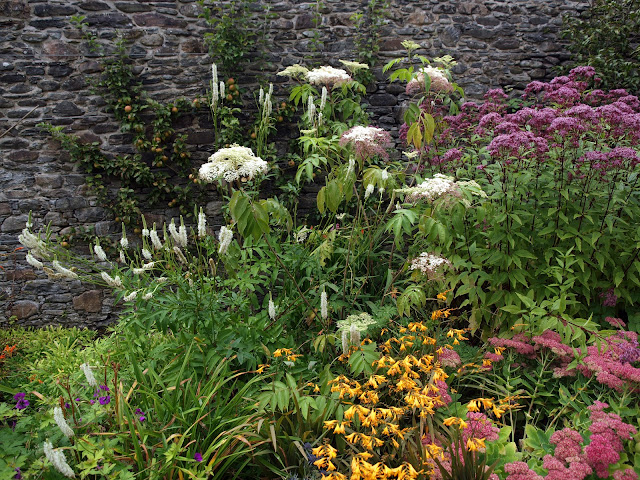 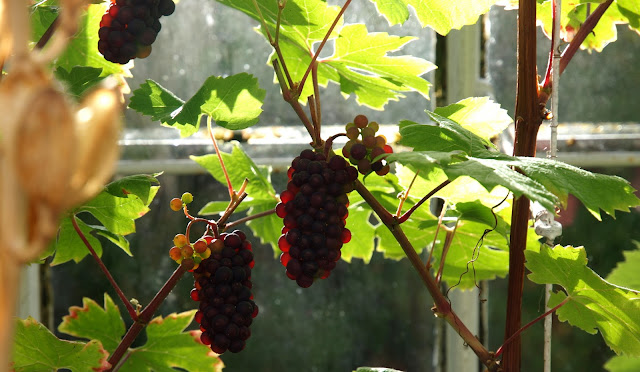 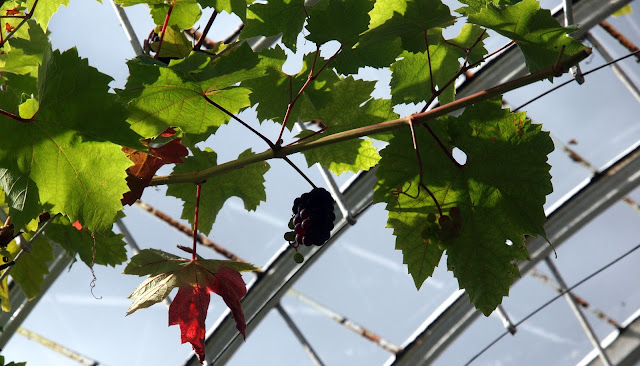 And then there's the beautiful Edwardian Glass House, fully restored and home to a grape vine 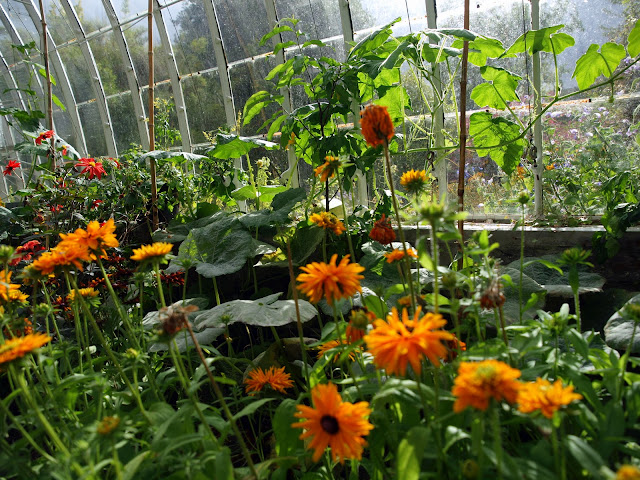 About here, just as I was giving up the notion of ever having any gardening knowledge ever, I spotted this 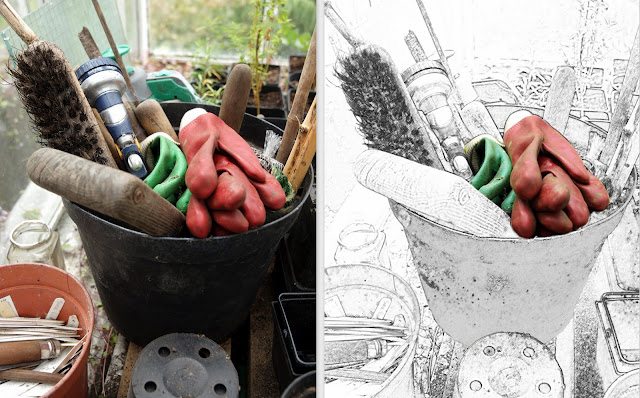 and suddenly it became clear and simple. All Lady Jane's gardener has is an old pot a few old packets of seeds, a broom with hardly any bristles, some sticks and a couple of pairs of rubber gloves - easy, I can do that! 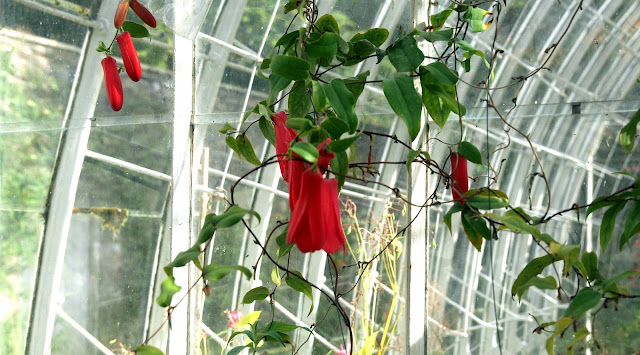 I don't have the green house though?! 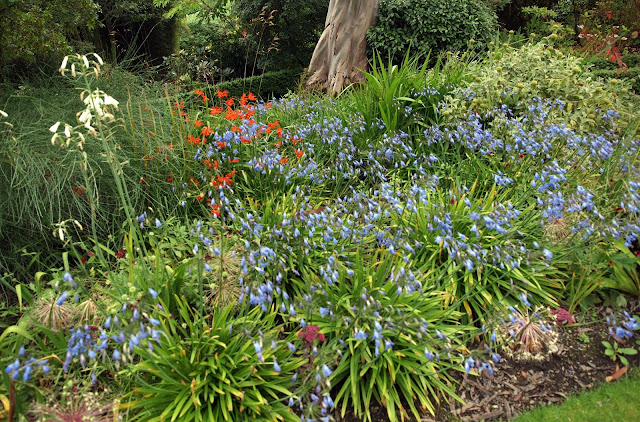 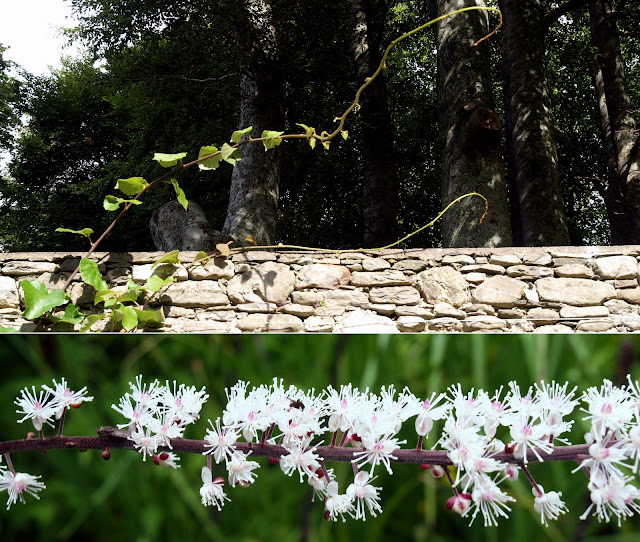 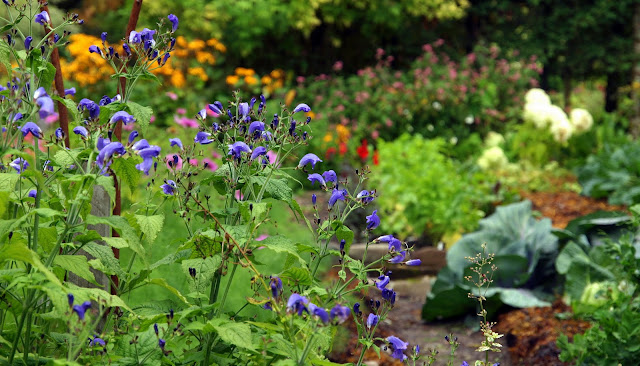 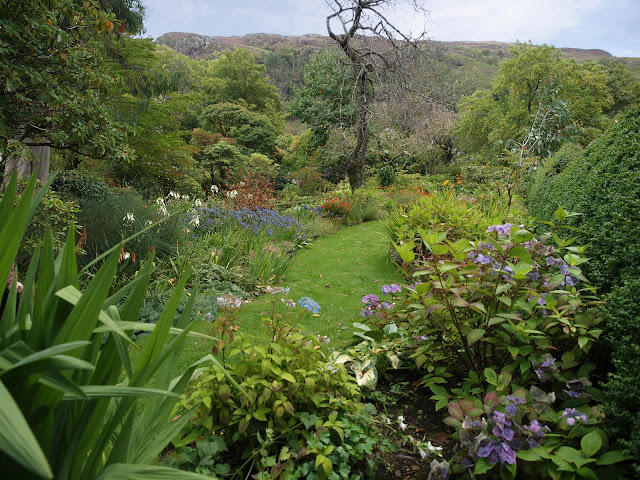 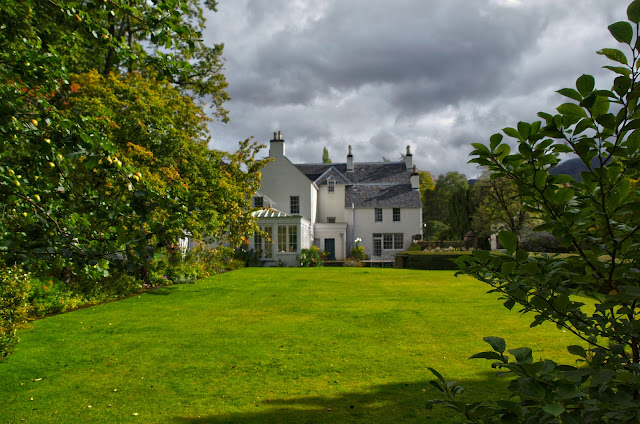 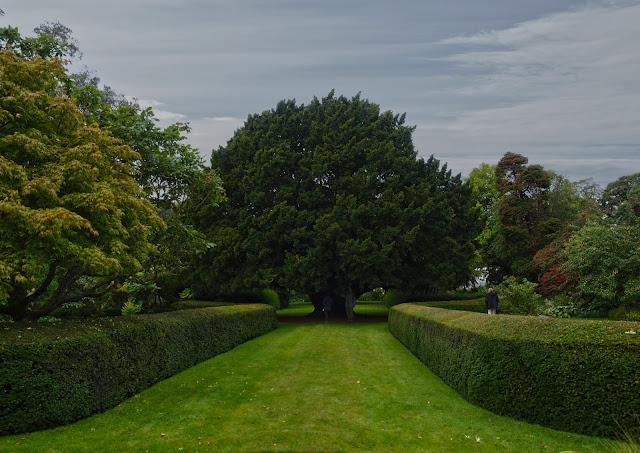 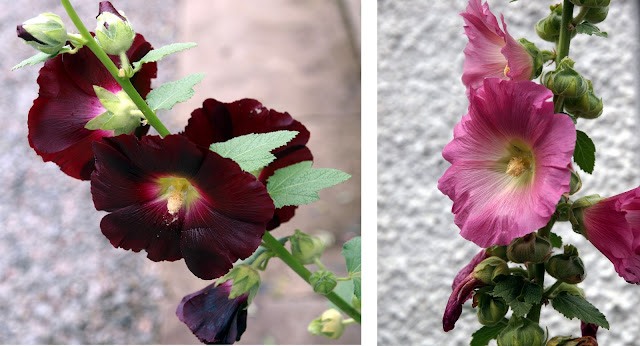 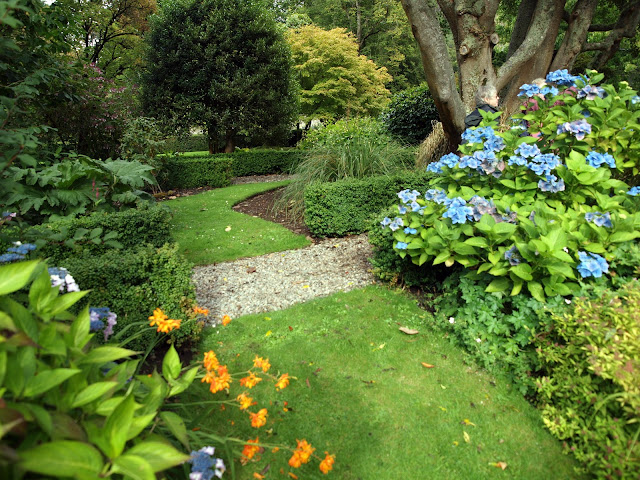 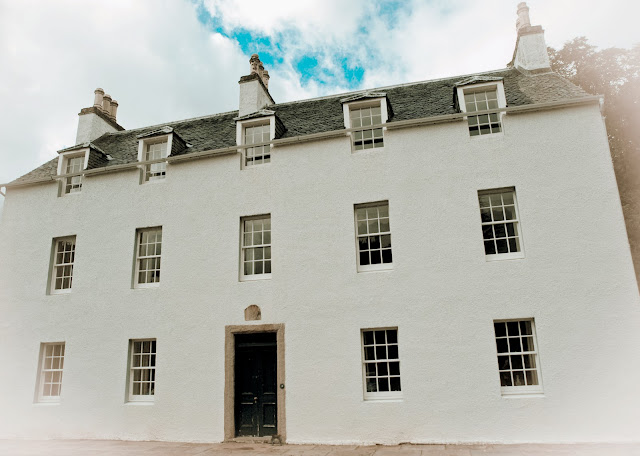 It isn't easy to just be passing by and nip in to this garden on it's occasional 'open days.'  It's off the beaten track and not really on the way to anywhere but should you be in the area, it really is a wonderful way to spend an afternoon. The house is beautiful too, though however which way I took the photo it looked austere, you have to take my word that it isn't.
I'm flattered that anyone should want to use any of the photos from here. I would only ask if you do, that you would be kind enough to put a link to my blog. Scottish Islands Explorer did, for which I'm very grateful and as a result have discovered a magazine covering all the islands of Scotland, full of information.
Posted by annie hoff at 20:50

What a wonderful 'complete' garden. The rain only makes it look more lush. It's pretty near the northern limit for successful apples as well as mistletoe. Perhaps that will change with global warming.

A great sweep of colour and beauty.
A wonderful place.
I like the colour popping on the bucket and bits. I'll have to give this a go.

What a wonderful place! Could you give us the address on the chance that it will be open when we come up there soon!

Hello Adrian. I love photoshop. I think it's the best software on the planet! but that's just my personal opinion!

Ju-north, I've sent you a link to Dundonnell House Garden. If it doesn't work let me know!

Beautiful garden! Now that it has finally cooled down a little here I can't wait to get out in the garden again. When we're in England I go around with garden envy the whole time, so many things that just won't grow here.
Thanks for the beautiful photos.

What a perfect place to spend time with a camera!

Those are wonderful photographs, thanks for the tour. My favourite one is the one with almost ghostly figures under the central tree. I somehow imagine there is one than one gardener working in that garden?! It is lovely.

Hello Janet - how funny. I've been waiting for it to warm up before I go out in the garden..!

Hello Christine the Yew tree in the centre is apparently one of the oldest yew trees in Scotland.

This is so stunning! It's the third time I've looked at it. And I'm sure I'll be looking again. Thank you for sharing your beautiful part of the world with those of us on the other side! :-)

Beautiful photos of the gardens. The weather looks like what we are having in the Pacific Northwest at the moment, and the plants could be here also. So familiar, but so far away. I love the posts from your world. Hope I get to travel there sometime.
Sarah