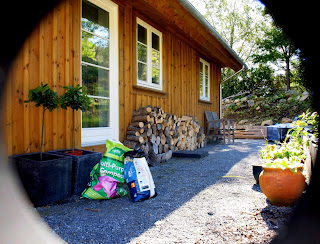 With the arrival of the fence, the pot plants are making a slow recovery, free from the onslaught of sheep. 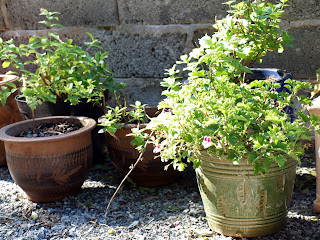 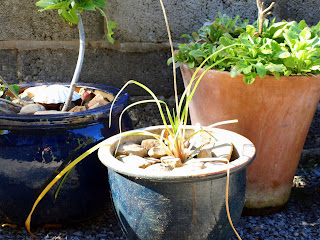 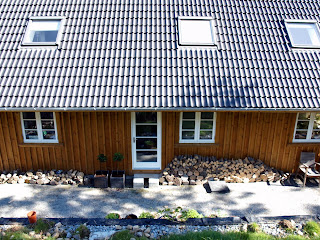 The garden is now so overgrown I despair we'll ever get it under control, so yesterday  concentrated my gardening efforts close to the house and planted bulbs in pots instead. 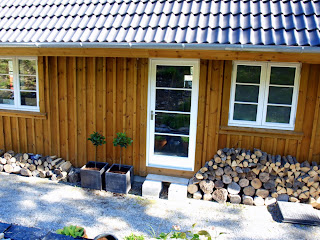 Next spring we are having a 'painting the outside of the house party.' We learned too late that the top coat of paint should have gone on within a month of the primer, so need to begin again. (sorry Jo, Em, Robin and Dan)
The driveway and hardcore area around the house still need a final top surface (to be decided) and the front door step, (two breeze blocks and plank of wood!)  will be replaced with a ramp - building regulations! When we're old and infirm (about now!) we'll need to get in and out of the house easily in our wheelchairs - providing we haven't  overshot the drive and landed in the loch instead!
And now to the sad part 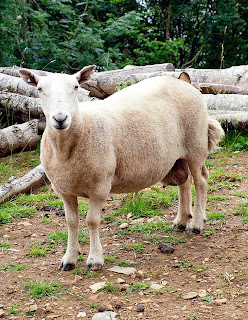 Poor lamb chop. Here she is just before the fencing was complete. In May she had a lamb that was either still born or died shortly after birth. It went unnoticed. She eventually turned up in the garden looking very ill. We rang the farmer and he came and treated her with antibiotics. Unfortunately her udders had become so engorged they never recovered and retracted (see photo).  After the fence went up in July I still went, complete with slice of granary bread and apple, and talked to her over the fence. I told her everything and as ever she remained completely uninterested.  She put on weight and began to look much better. I recognize I'd make a terrible sheep farmer, the place would be  over run with pet sheep, but I also recognize that the sheep here are part of the food chain. The sheep farmer told me Lamb chop couldn't  lamb anymore. As I now haven't seen her for several weeks and as the farmers have been along the lane rounding up and singling out sheep, I strongly suspect I won't see her again. She was very unlucky, there are so many lambs born here in the spring and most appear to thrive. She was five years old and if all had gone to plan she would have continued to roam the hillside here, together with sisters aunts and cousins eating apples and granary bread while producing lambs for market. She seemed a 'one off' slightly at odds with her lot as a sheep. From the first she was the sheep that ran up where others ran off. I do miss her.
Posted by annie hoff at 11:36

Hi Diane
I still look out for her just in case. It's a tough life being a sheep I think!
It's slightly 'unhappy gardening' at the moment but it'll get better hopefully!

I've looked at your photo and even embiggened it and you don't look a day over 35. Sorry about Lamb Chop but at least she'll never have to be Mutton.

I do now Lucille! Living here and trying to build this house I look twice 35 - feeling more and more like a bit of old mutton daily!

Yes Em, the bird feeder is great, has trillions of birds fighting to get a place on it everyday, and me driving across the highlands stocking up on sunflower hearts!! The plants have stayed beautifully in place and look happy and snug - thank you Dan you did a brilliant job...when are you coming back?!